Most cell phone owners in the US use those devices while watching TV, often to get more information about televised content: Some 52% of all adult cell phone owners, including 76% of those age 18-34, incorporate mobile phones into their television watching experience, according to a report by Pew Research.

Such "connected viewers" use their cell phones for a wide range of activities—with younger adults and smartphone users far more likely to use their phones as a "distraction device" or multitasking tool during programming breaks.

Below, additional findings from the report titled "The Rise of the 'Connected Viewer,'" issued by Pew Research Center's Internet & American Life Project.

As of April 2012, surveyed adult cell phone owners said they had conducted the following activities during the previous 30 days:

Young adults in particular stand out for embracing multiscreen viewing experiences: Some 81% of mobile owners age 18-24 reported using their cell phones during televised programming in the previous 30 days. Among other demographic differences in "connected viewing" are the following: 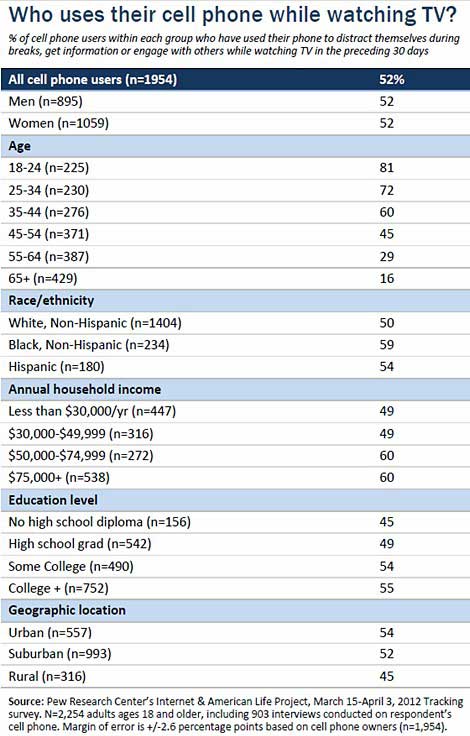 Smartphone owners use their devices to interact with televised content at far higher rates than owners of more basic mobile phones.

Fully 74% of smartphone owners reported using their devices in one way or another while watching television in the previous 30 days, compared with 27% of non-smartphone owners. 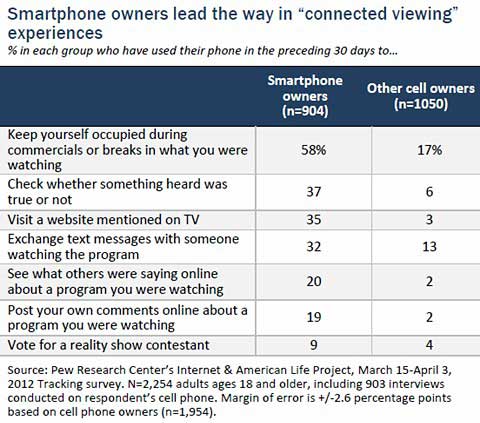 Cell phones used as as a "distraction device" or multitasking tool during programming breaks was the most prevalent among the various individual connected viewing behaviors measured (Pew examined seven in total).

Overall, 32% of cell owners used their mobile devices in the 30 days preceding the survey for one or more of the reasons (below), and cell owners under age 25 recorded higher levels of engagement in each of those activities. 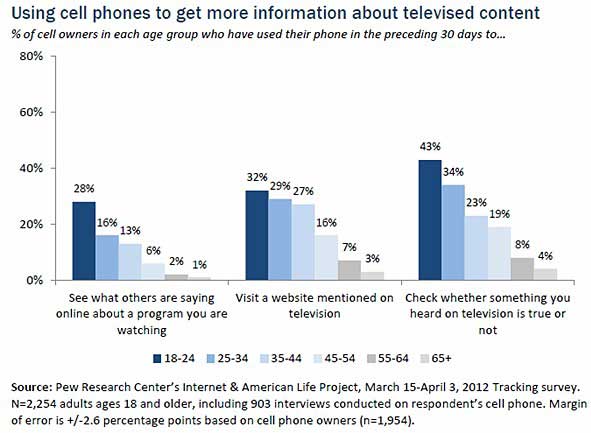 Meanwhile, using one's cell phone to visit a website mentioned during televised programming was relatively common among older cell owners as well: Engagement in that behavior did not drop significantly until roughly age 45.

Generational differences are apparent in other connected-viewing behaviors:

About the data: Findings are from the report "The Rise of the 'Connected Viewer,'" authored by Aaron Smith, Pew Internet Project, and Jan Lauren Boyles, issued by the Pew Research Center's Internet & American Life Project and Project for Excellence in Journalism, July 17, 2012, and accessed on July 24, 2012. Data are based on a survey of 1,954 cell phone owners age 18 and older, conducted by Princeton Survey Research Associates International from March 15 to April 3, 2012.