The world's leading companies are becoming more active on Instagram, according to a new study by Simply Measured: Among the brands listed on the Interbrand Top 100, 40% now have an Instagram profile.

That penetration level is far behind that of Facebook (98%) and Twitter (94%), but it is still impressive considering Instagram is much newer and mobile-only, and it has no administrative or brand management features. 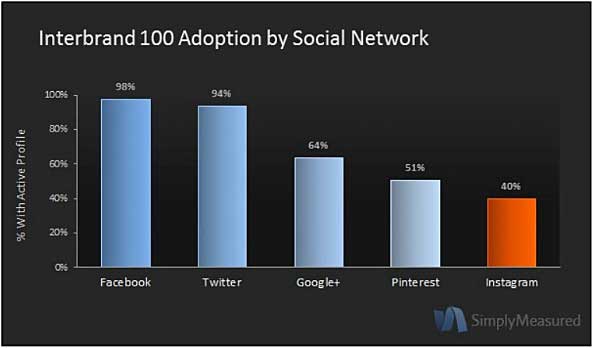 At the beginning of 2012, Instagram had roughly 15 million users, and it was available only via the iPhone OS. Seven months later, now also available to Google Android users, the platform's user base has swelled to 80 million.

Below, other findings from the Instagram study, which examines the performance of the Interbrand Top 100 on the social/mobile platform for the three months ended July 31, 2012. 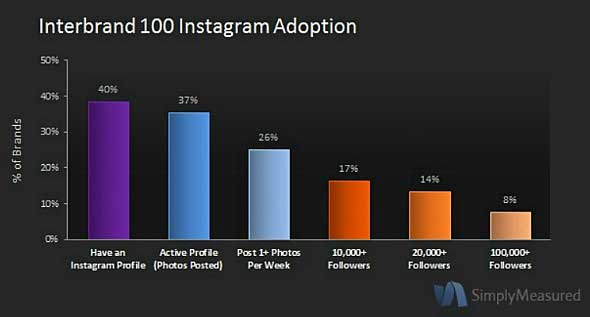 Luxury brands are leading the charge on Instagram: Burberry, Tiffany & Co., Hermès, Gucci, and Armani are applying Instagram's visual format to drive engagement with their products, according to the study.

MTV and Starbucks are the two biggest individual standouts in terms of reach: Both are approaching 1 million followers, they post frequently, and they average over 3,000 likes per photo.

However, when ranked by engagement (as a percentage of followers), Nike and Audi are clear leaders: 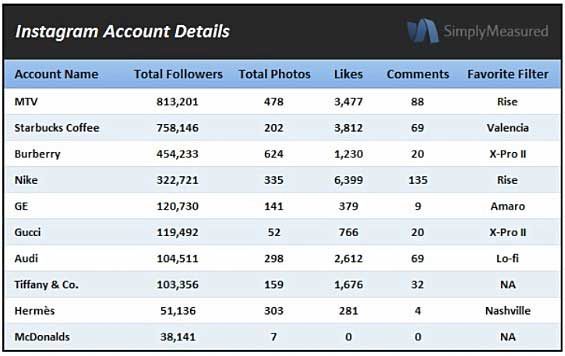 Among the photos posted during the three-month period, 60% had Instagram's trademark filters applied to them. The most popular options were Lo-fi (14%), X-Pro II (14%), and Hudson (13%). However, the Valencia (7%) program had the highest engagement, the study found.

About the study: All data and analysis are from Simply Measured social analysis and reporting for the three months ended July 31, 2012.