Overall, mobile users appear to be more satisfied with their tablets than their smartphones, with Apple's iPad ranking highest in tablet consumer satisfaction (scoring 8.8 on a scale of 1 to 10), just edging out Amazon's Kindle Fire (at 8.7), according to data from comScore's newly launched TabLens service.

Among owners of tablets and smartphones, the Kindle Fire is the highest-ranking Android tablet in the survey, with all other Android tablets together garnering an average score of 8.2. 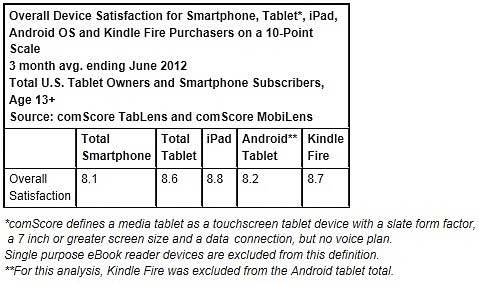 Overall, tablet owners are highly satisfied with their respective devices, with the average satisfaction rating reaching 8.6, compared with 8.1 for smartphones.

Below, additional findings from comScore TabLens and MobiLens, based on data collected for the three-month period ended June 2012. 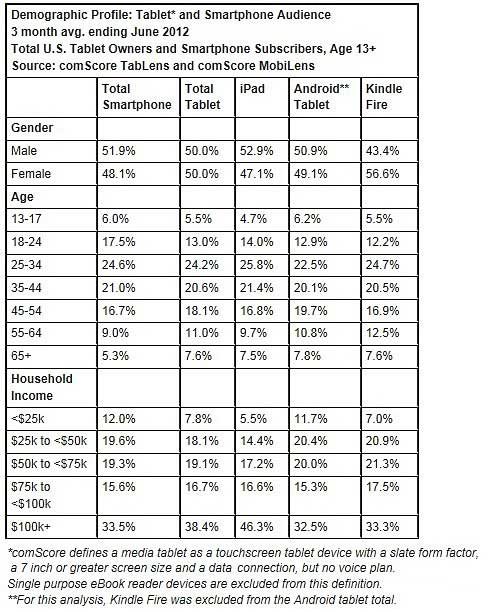 Apps, Price, and Brand Most Important in Purchase Decision

Overall, apps selection and price rank as the most important purchasing factors, both scoring 7.7 (on a 10-point scale). Brand name of tablet and tablet OS (operating system) follow as the next most important factors, each with a 7.5-rating. Music/video capabilities ranked No. 5 in purchase consideration factors with a rating of 7.4. 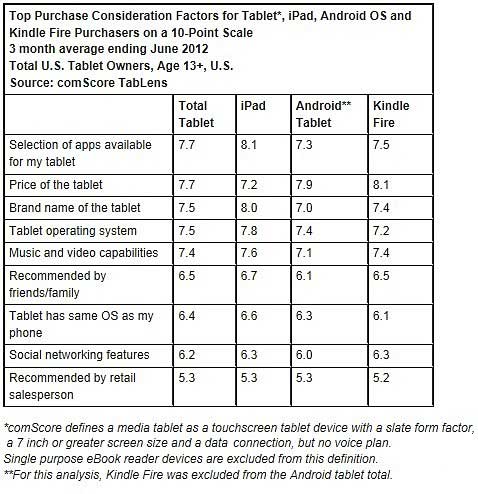 Brand name of tablet and OS both score as less important among Kindle Fire owners than for iPad owners.

Moreover, consumers don't place strong importance on having the same operating system across their tablet and smartphone, with this factor falling outside of the top five consideration factors for iPad, Kindle Fire and tablet owners overall.

About the data: comScore's monthly reporting is based on a three-month rolling sample size of 6,000 US tablet and smartphone owners.