Twitter Underground: Buying and Selling Fake Followers (Politicians Do It, Too)

For the study, which began in May 2012, Barracuda Labs set up three Twitter accounts and purchased between 20,000 and 70,000 followers for each account from eBay and another website found via Google search. Barracuda then analyzed those followers' profiles and tweets.

Below, additional findings from Barracuda's study.

Dealers (users who create fake accounts and sell followers) can earn up to $800 per day for seven weeks of selling Twitter followers if they control roughly 20,000 fake accounts, Barracuda estimates. Dealers also have the option of selling re-tweets as an additional source of revenue, at roughly $5 for 2,000 re-tweets. 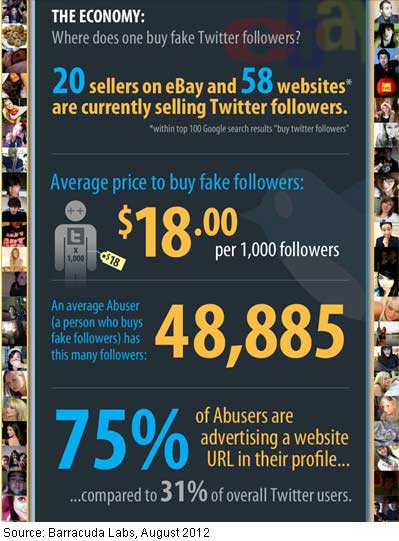 Abusers are defined as those users who buy followers (most of which are fake) in order to look more popular or to use the accounts for selling ads:

Fake Accounts are those created by dealers for selling followings or tweeting. In total, Barracuda found 72,212 unique fake accounts; among them:

Those followers could have been purchased by either Romney himself, his associates, or by his opponents, Barracuda notes. Among Romney's newest 152,966 Twitter follower accounts, gained July 21-26, 2012: 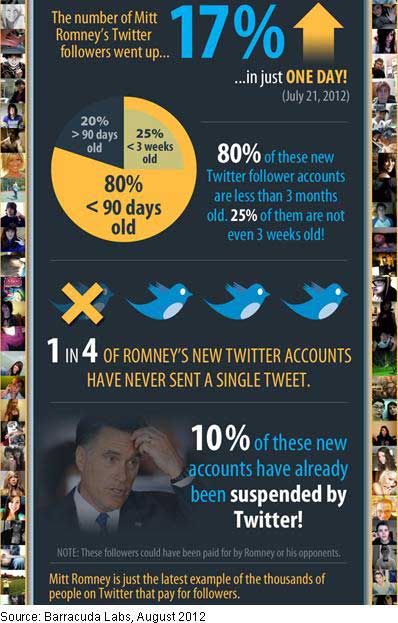 About the data: The study began in May 2012. Barracuda Labs set up three Twitter accounts and purchased 20,000-70,000 followers for each account from eBay and another website found via Google search. Barracuda then analyzed those followers' profiles and tweets.