Coca-Cola, Apple, and IBM became the three most valuable brands in 2012, according to Interbrand's 13th annual Best Global Brands report.

Though Coca-Cola retained its No. 1 position from the 2011 ranking, Apple jumped six spots to rank at No. 2 with stellar sales in both developed and emerging markets over the past year.

Facebook debuted on the list at No. 69 after making headlines as the third-largest IPO in US history, and Google (No. 4) recorded a 26% increase in brand value over the previous year, exceeding rival Microsoft's (No. 5) brand value for the first time in the history of the report. 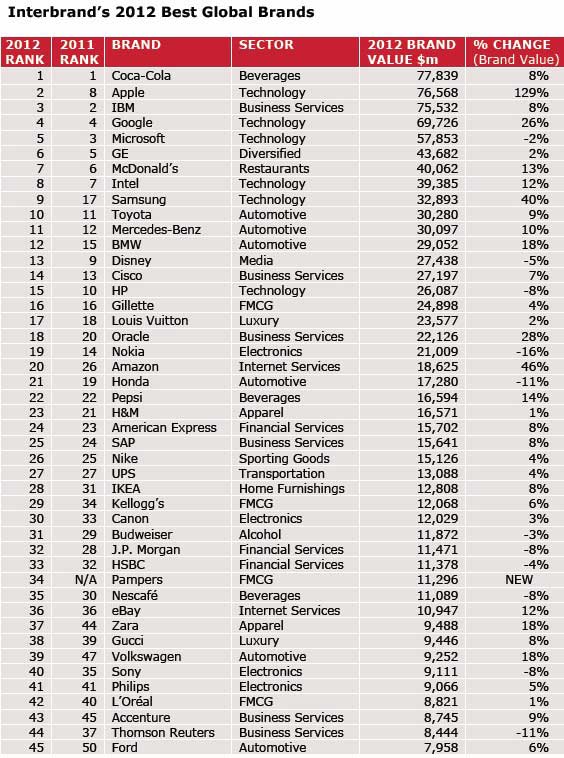 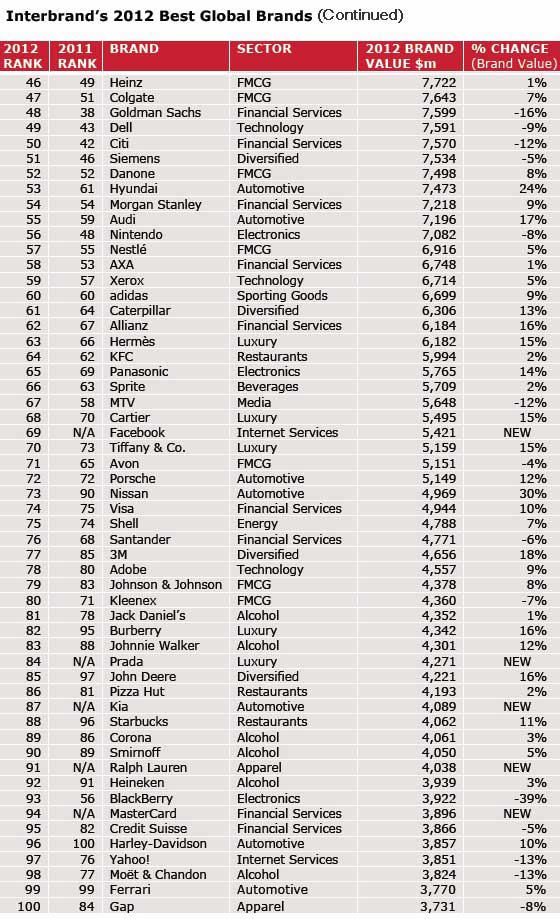 "The world's 100 most valuable brands are leading the way by listening to consumers, employees, and investors alike and delivering a seamless and holistic brand experience across an ever-evolving range of touchpoints."

Below, additional findings issued by Interbrand.

Tech brands continued their strong push of recent years, with four of the five top risers hailing from the sector (Apple, Amazon, Samsung, and Oracle). In addition, five of this year's top 10 brands hail from the tech sector (Apple, Google, Microsoft, Intel, and Samsung).

Audi's (No. 55) digital showroom, Audi City, is revolutionizing the future of retailing by combining digital product presentations and personal contact with dealers. Similarly, Ford (No. 45) is working to improve MyTouch, its in-car communications and entertainment system.

Brands such as BMW (No. 12) and Hyundai (No. 53) are investing in global brand campaigns and are becoming more digitally connected and tailored to narrower target groups.

Despite the current economic landscape, all of the luxury brands in this year's report increased their brand value.

Another growing trend observed this year was the increasing number of FMCG brands expanding into the healthcare space.

Financial services brands are continuing to feel the impact of 2008's global economic downturn. Recent events, such as the notorious Libor scandal, have tarnished the reputation of leading brands such as Credit Suisse—down 5% in brand value and ranked at No. 95.

MasterCard (No. 94) was a new entrant to this year's report, an indication that its "Priceless" campaign continues to succeed in building a stronger connection between the brand and its growing customer base.