Interactive Display Media Forecast: $28B by 2017

Online display ad spending in the US is forecast to grow at a compound annual growth rate (CAGR) of 17% over the next five years, from an estimated $12.8 billion in 2012 to $27.0 billion in 2017, according to an Oct. 9 report by Forrester Research.

Interactive display media spend is expected to outpace total ad spending rates: Offline media is poised to grow at a modest 1.1% CAGR over the same period. 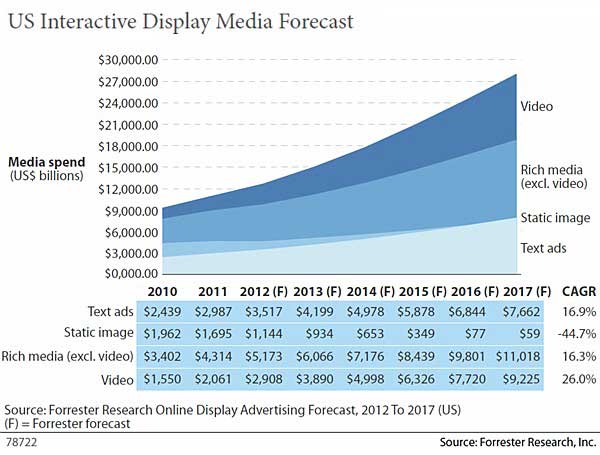 Growth in video is projected to outpace other interactive channels.

Programmatic-exchange-based trading is forecast to account for 30% of total spend by 2017; concurrently, rich media and long-form video are expected to grow at 16% and 26% CAGRs, respectively, from 2012 to 2017.

The momentum in programmatic is attributed by Forrester to the shift to audience-centric buying, while the growth of rich media and video is attributed to the increased availability and quality of video placements.

Other key projections, issued by Forrester: