Advances in ad technology have helped drive dramatic increases in digital video spending in 2012, according to a report by Adap.tv and Digiday: 97% of surveyed video buyers (agencies, brands, and trading desks) say their video ad budgets have grown 27% in 2012 over 2011 levels, and most expect the momentum to continue into 2013, with video budgets expanding 20% year over year.

Moreover, 22% of video buyers—nearly double the proportion of those polled in 2011—say digital video budgets are now incremental (i.e., digital video has its own budget line-item). 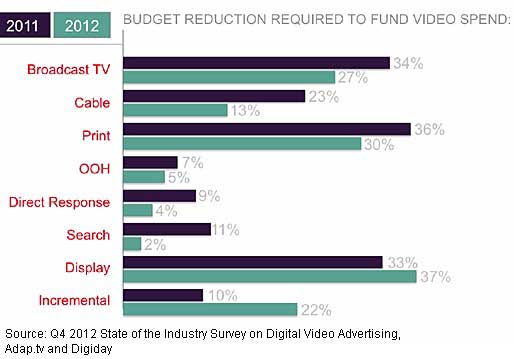 However, most video buyers have tapped other budget sources to fund video ad spending in 2012:

Below, additional findings from Q4 2012 State of the Industry Survey on Digital Video Advertising, issued by Adap.tv and Digiday.

The proportion of agencies that are planing TV and video together has reached 58%, up 10 percentage points from the 48% reported six months earlier. 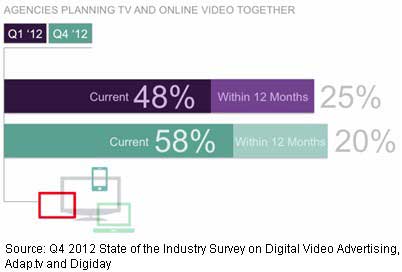 Meanwhile, another 20% of agencies are planing to integrate TV and video planning over the next 12 months.

Asked where they source their online video ad inventory, 81% of advertisers cite ad networks, while 78% say they source ads directly.

However, advances in technology are enabling greater numbers of advertisers to source via automated environments: 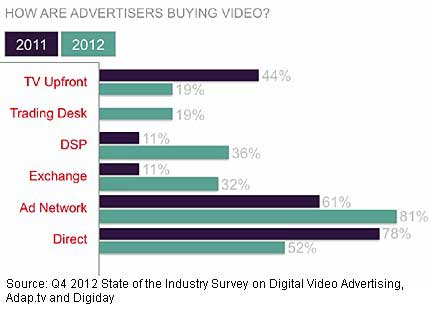 Moreover, fears that employing such automated marketplaces would diminish CPM rates appear unfounded. Some 84% of video buyers say CPMs for their online video inventory are on the rise, by an average of 12% (vs. 80% reporting CPMs were up 11% six months earlier).

Other key findings issued by Adap.tv and Digiday:

About the data: This survey was conducted in the fourth quarter of 2012 among Digiday subscribers, conference attendees, and speakers who describe themselves as digital media and marketing professionals. Among the 700 respondents, 43% were from agencies, 25 from publishers, 19% from ad networks and DSPs, and 13% from brands.