For the fourth consecutive year, "facebook" was the most popular search term, accounting for 4.13% of all searches conducted in the US in 2012, up 33% from 2011 levels, according to a report from Experian Marketing Services, which analyzed the top 1,000 search terms for 2012.

Four variations of the term "facebook" were among the top 10 search terms during the year, accounting for 5.62% of US searches overall, up 27% year over year (YOY). The term "youtube" maintained its No. 2 spot in 2012, while "craigslist" moved up one spot to take the No. 3 spot. The search term "amazon" moved into the top 10 for the first time in 2012: 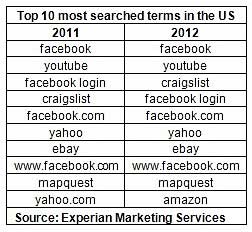 Below, additional findings from Experian Hitwise.

Among other findings related to the top 50 search terms:

"Single-word searches grew 16% in 2012 as a result of continued reliance on search engine's suggested results. Other top 2012 searches reflected the ongoing infatuation with celebrities online."

New terms that entered the top 50 search terms for 2012 were backpage, cool math games, fox news, pinterest, and pof (an acronym for Plenty of Fish, the top visited dating site in the US).

Facebook was the top-visited website for the third consecutive year, accounting for 79.1 billion total US visits in 2012. Google.com ranked second, with 78.5 billion visits, followed by YouTube (25.9 billion), Yahoo Mail (22.2 billion) and Yahoo (20.8 billion). 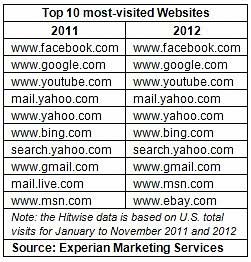 In 2012, Whitney Houston was most popular public-figure search term in the US, ranked No. 196 among the top 1,000 search terms.

Below, top search across various categories:

The top searched for sports team was the Dallas Cowboys.