Most Frugal US Cities: Atlanta, Orlando, and Tampa

Saving money has become second nature for many Americans, but the South and Midwest still have a leg up on the rest of the country, according to the 2012 Savings Index by Coupons.com, which ranked US cities by their use of digital coupons in 2012.

Atlanta took top prize (holding on to its title for the fourth consecutive year). Orlando was second, followed by Tampa, Nashville, and Charlotte: 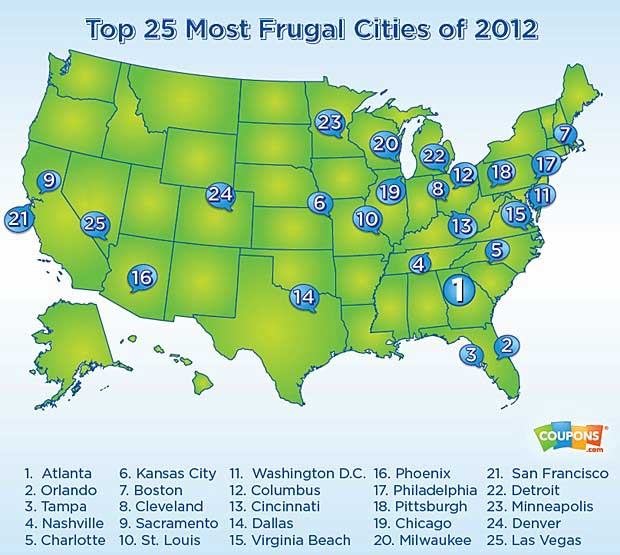 Other key findings, issued by Coupons.com:

Some 305 billion digital coupons were distributed in the US in 2012, giving consumers more than $450 billion in potential savings, according to the report.

Mobile coupons are also a favorite among people living in Southern states.

Consumers in Orlando were most likely to cash in on coupons via mobile devices in 2012, with that city moving to the top of the "most on-the-go frugal cities" list. Nashville ranked second, followed by Atlanta (No. 3), Tampa (No. 4), and Dallas (No. 5).

The number of discount coupons redeemed via mobile devices is forecast to reach 10 billion in 2013, up more than 50% from 2012, according to separate research from Juniper Research.

About the data: Findings for the Coupons.com Savings Index are based on use of Coupons.com's Grocery iQ and Coupons.com mobile apps, collected in 2012.