Social gaming has become one of the most engaging and popular activities across all screens—desktop, mobile, and tablet devices—the report found. Moreover, in-game ads appear to be an effective ad format across a variety of metrics.

The report compares the performance of social gaming ad campaigns—in all formats, including video, via desktop and mobile devices—with standard online and video advertising benchmarks published by eMarketer.

Below, findings from the first MediaBrix Social and Mobile Gaming Report, based on data for the second half of 2012. 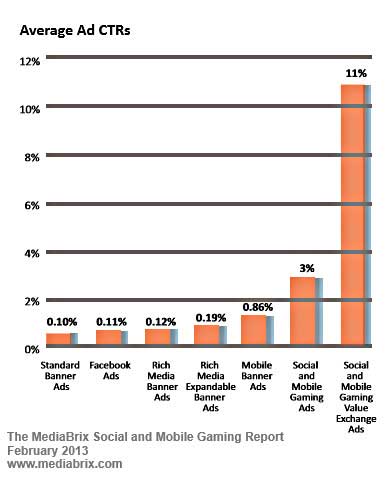 Social and mobile gaming value-exchange ads—in which users receive a reward for viewing the full ad—generate an average CTR of 11%, over 100 times higher than the CTR of standard banner advertising campaigns. 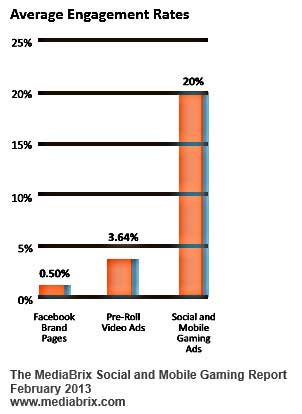 On average, social gaming value-exchange video ads boast a completion rate of 91%, compared with 84% for ads served via video portals, 83% for news sites, and 73% for news outlets. Only ads viewed in full episodes (e.g., video on Hulu) achieve higher completion rates, at 93%: 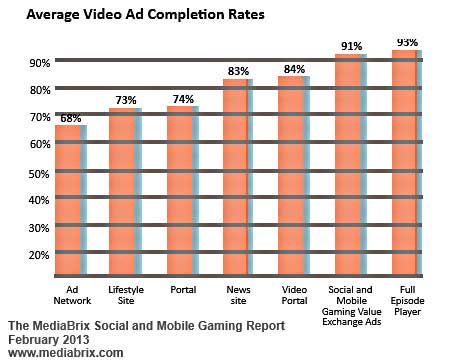 About the data: The MediaBrix Social and Mobile Gaming Report data was compiled from July 1, 2012 to December 31, 2012 across social and mobile games. MediaBrix benchmarks were calculated by averaging proprietary data collected from 100 social and mobile gaming ad campaigns and more than 1 billion impressions. The ad data was then compared with industry benchmarks supplied by eMarketer.