Social Media and Recruiting: Top Channels and Trends for 2013

Among recruiting and staffing professionals, increased access to passive job candidates via social media presents the biggest opportunity for recruiting in 2013, according to a survey from Bullhorn.

Asked to identify the one factor that offers the greatest opportunity in recruiting for 2013, 47% of surveyed staffing and recruiting professionals cited increased access to passive candidates via social channels, 18% cited efficient business practices, 15% cited increases in flexible roles and working environments, and 7% cited untapped growth in emerging economies.

Below, additional findings from the North American Staffing and Recruiting Trends report, issued by Bullhorn in February 2013.

Among those using social media for recruiting, LinkedIn was the most popular channel (97%), followed by Facebook (51%) and Twitter (49%). 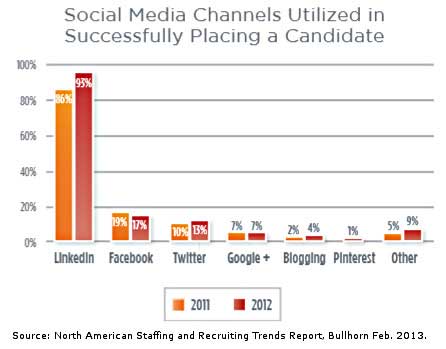 Asked which social networks they plan to use more in 2013, 38% of recruiters cited Twitter and 37% cited Facebook.

Recruiters rated the effectiveness of various methods for finding candidates in 2012 on a scale of 1 to 5 (1 being least effective, and 5 being most effective).

"Networking with other people, firms, and associations" came out on top with an average of 4.17, "referrals from previous placements" was second with 4.08, and "in-house candidate databases" rounded out the top three at 3.84. Meanwhile, 45% of recruiters cited "social media" as a highly effective sourcing method, giving it an average rating of 3.48. By contrast, in 2011 social media was in last place with a 3.18 rating. 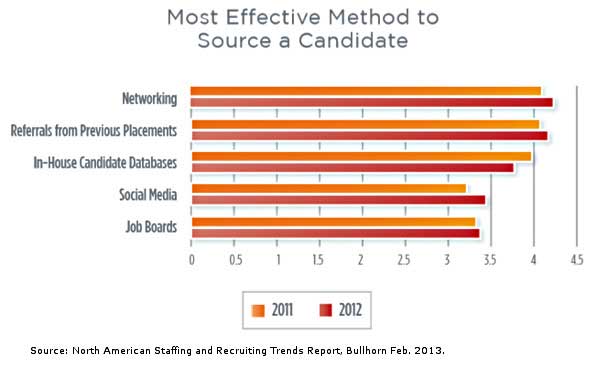 Surprisingly, the method ranked as least effective for finding quality candidates in 2012 was job boards.

About the data: Findings are based on a survey of 1,848 staffing professionals in the US (84%), Canada (8.2%), US Virgin Islands (0.4%) and Puerto Rico (0.1%), conducted in December 2012. Some 59.2% of respondents were recruiters, account managers, or sales representatives; 22% were vice presidents, directors, or managers; 16.3% were board members, C-level executives, owners, or presidents; and 2.5% held miscellaneous agency positions.