Affluents Upbeat About Economy (and 2 in 3 Multitask Regularly)

Buoyed by stock market gains as well as improvements in the housing and job markets, optimism among affluent Americans has reached a six-month high, according to Ipsos MediaCT's February 2013 Mendelsohn Affluent Barometer.

The study also found that more than one in three (37%) Affluents—adults living in households with at least $100,000 in annual household income—multitask regularly: Two-thirds (66%) say multitasking contributes to their productivity.

Below, additional findings from the February 2013 Mendelsohn Affluent Barometer from Ipsos MediaCT.

Affluents constitute 20% of the US population and hold 69% of the privately held net worth in America, according to the report. They are vitally important for many marketplace categories, including luxury, automotive, financial, technology, and travel.

Some 43% of Affluents were optimistic about the US economy in February, up from 40% in December 2012 and 34% in October 2012. By contrast, only 36% of Affluents described themselves as pessimistic in February. 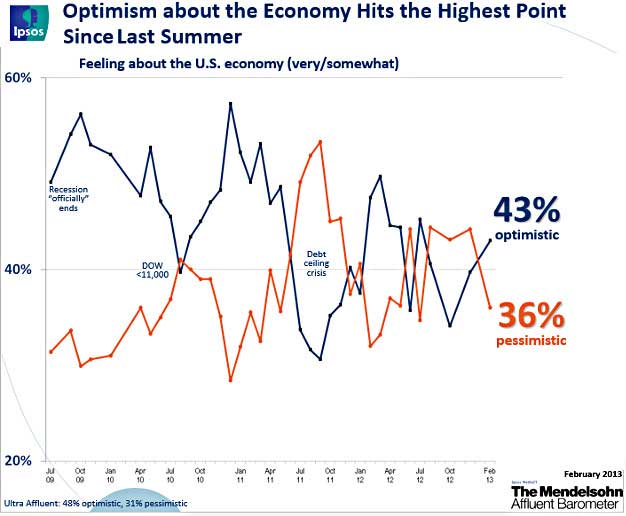 Ultra Affluents—the 2-4% of Americans with at least $250K+ household income, are even more optimistic: 48% say they are somewhat or very optimistic about the US economy, and only 31% say they are pessimistic.

Luxury spending among Affluents will likely remain at current levels; however, spending among Ultra Affluents is expected to be stronger, particularly in categories related to travel, apparel, accessories, watches, and jewelry.

Multitasking is a way of life among Affluents, who tend to be early adopters of the latest technology, such as tablets and smartphones.

Among the Affluents surveyed: