Some 178 million Americans—roughly 83.3% of the US Internet audience—watched more than 33 billion video content views in February 2013, with Google Sites generating the highest number at 11.3 billion and Facebook reaching its all-time high of 558 million, according to data from the comScore Video Metrix service.

Among the top 10 video properties, Google Sites had the highest average engagement.

Google Sites, driven primarily by YouTube.com, ranked as the top online video content property in February with 150.7 million unique viewers, followed by Facebook with 61.2 million, VEVO with 49.5 million, NDN with 46.3 million, and Yahoo Sites with 43.6 million. 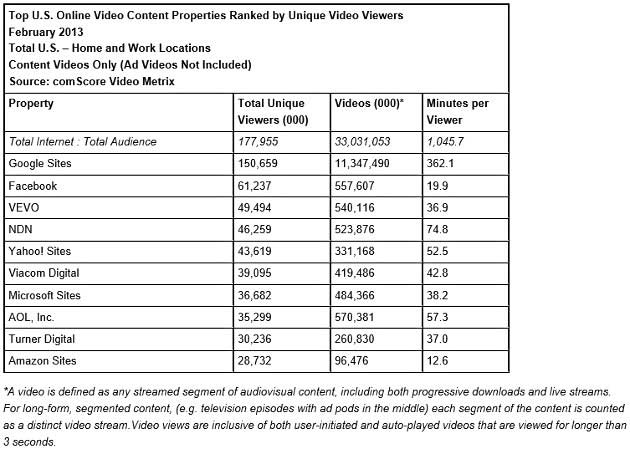 Google Sites had the highest average engagement among the top ten properties in February with 1,024.7 minutes per viewer (MPV).

Americans viewed 9.9 billion video ads in February, with Google Sites ranking first with its all-time high of 2.2 billion ads. BrightRoll Video Network came in second with 1.6 billion, followed by Hulu with 1.4 billion, Adap.tv with 1.4 billion, and LiveRail.com with 1 billion. 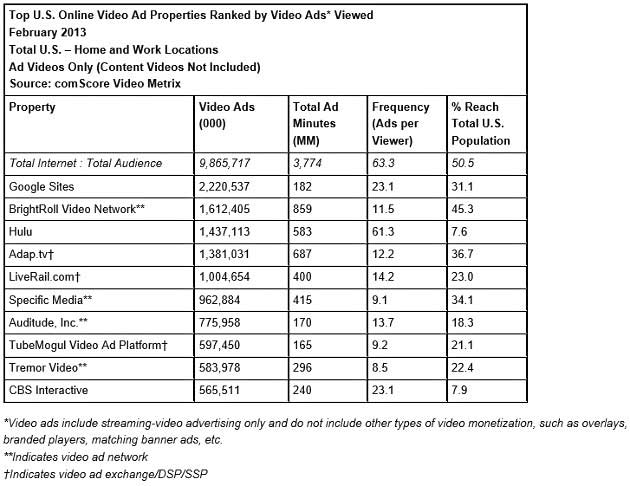 Meanwhile, video ads reached more than 50% of the total US population 63 times during the month on average.

Video music channel VEVO maintained the top position in comScore's ranking of YouTube partners with 48.2 million viewers in February. Fullscreen held on to the No. 2 position with 36.8 million viewers, followed by Maker Studios with 30.5 million, Warner Music with 26 million, and ZEFR (formerly MovieClips) with 23.8 million. 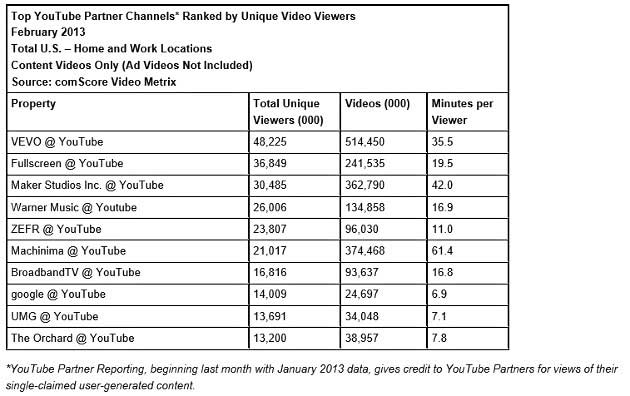 However, VEVO streamed the greatest number of videos (514 million), followed by Machinima (374 million).

Video ads accounted for 23% of all videos viewed and 2% of all minutes spent viewing video online.