In 2007, local business spent 10% more on advertising than they did on promotions (e.g., coupons, discounts, and promotional products); however, in 2012, they spent a stunning 81% more on promotions, according to a new report by Borrell Associates.

The key to that change is digital promotions, Borrell found.

The steady four-year decline (2007-2010) in ad spend was due primarily to the collapse of the nation’s housing marketing in 2007 and the Great Recession of 2008, according to the report. Meanwhile, as the ad market struggled to recover, the use of local promotions accelerated.

Below, selected findings from the 2013 Local Promotions Forecast by Borrell Associates.

After rising past the half-trillion dollar level in 2012, total promotions spend is forecast to rise 8% in 2013, to $628 billion. The local portion of that spend constitutes roughly 28% of total promotions. 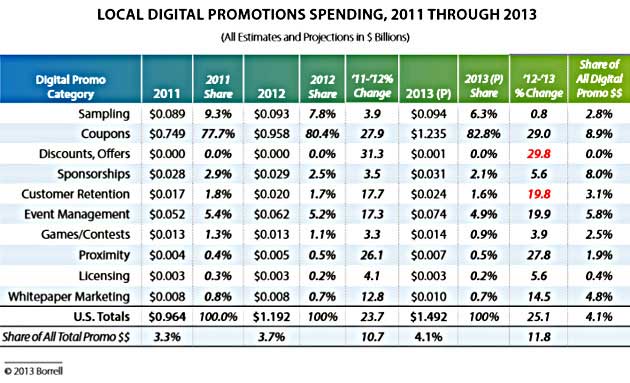 Local marketers have begun to penetrate the digital sampling category (e.g., offering free 30-day software trial) (9.3%) and, to a lesser extent, the event management category (5.4%). The latter share is expected to grow 19.9% year over year by the end of 2013.