The Rich Are Different: How Affluent Shoppers Behave Online

Affluent shoppers were 47% more likely than shoppers earning less than $100K annually to make an online purchase in the first quarter of 2013, and on average they spent 41% more on individual purchases, according to a recent report by Martini Media and comScore.

The gap between affluent and non-affluent spending grew in 1Q13 compared with the December 2012 holiday period, when affluent consumers were only 31% more likely to buy and spent only 15% more.

Below, additional key findings from the Affluent Online Shopper Index, which tracked of the online shopping behavior of those with household incomes greater than $100K annually in 4Q12 and 1Q13.

A Taste for Luxury 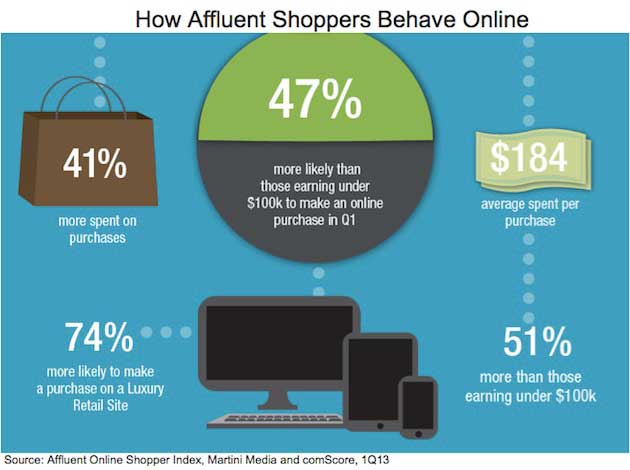 Affluent spending in 1Q13 indexed especially high in the apparel, accessories and jewelry, general services, and event and movie tickets categories; that was consistent with previous-quarter data. 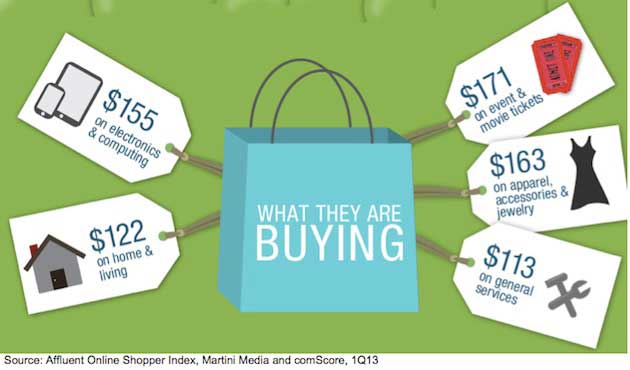 About the research: The Affluent Online Shopper Index was based on comScore data. It examined the behavior of the online affluent audience (defined as those with a household income greater than $100K) by indexing affluent users (across the Internet) against non-affluent online users (HHI < $100K).