Which Types of Websites Are Visited Most Frequently?

Most people globally who are online visit three types of websites once a week or more: a search engine (74%) such as Google, a social networking site (64%) such as Facebook, and a portal site for checking emails (55%) such as Gmail, according to a recent report by Ipsos.

Three other types of sites are visited regularly by four in ten of global respondents: a user-generated or upload site such as YouTube (44%), a news and information site such as CNN.com (42%), a weather site such as Weather.com (39%), and a shopping site such as Amazon.com (35%).

The findings reflect data from an online survey of 18,503 global respondents.

Search engines were the most popular sites visited by respondents in most of the countries surveyed. Five countries, however, had more respondents who said they regularly visit social networking sites more often than search engines: Hungary (78%), Indonesia (78%), Mexico (77%), Russia (71%), and Saudi Arabia (70%). 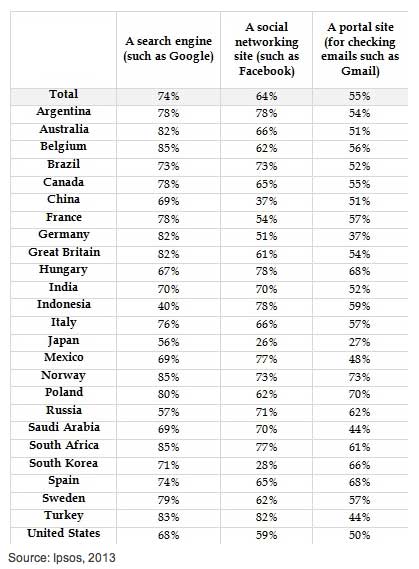 Continue reading "Which Types of Websites Are Visited Most Frequently?" ... Read the full article