Fully 8 in 10 people worldwide say they are optimistic that the new year will be a better year than the previous one, up 8 percentage points from the 72% who said so a year earlier, according to a 23-country poll conducted by Ipsos for Reuters.

Below, additional findings from Ipsos.

Global citizens appear to be channeling their optimism into developing personal goals: 80% say they are planning personal New Year's resolutions for 2013, and 55% cite improving their financial situation as the goal they most want to achieve during the year.

Only a small proportion would rather spend more time with friends and family (16%), improve their health (14%), or travel to other countries (12%). 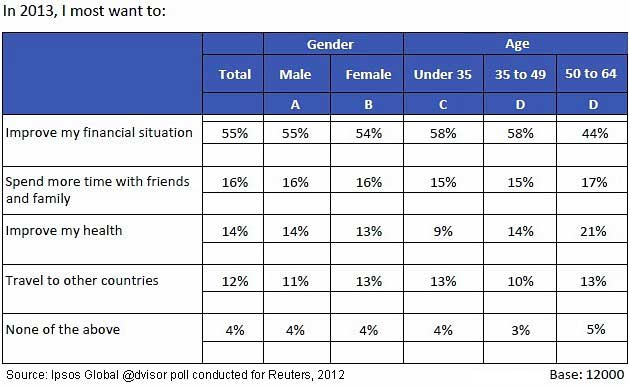 Personal Goals for 2013: US and Canada

Compared with the global average, a smaller proportion of US adults (50%) say they most want to improve their financial situation in 2013, whereas a slightly higher proportion say they want to spend more time with friends and family (19%) and improve their health (21%).

Only 6% of American adults say they are most interested in travel outside the US in 2013.

Among the Canadians adults surveyed, 47% say they most want to improve their financial situation in 2013, 16% cite spending more time with friends and family, 19% cite improving their health, and 12% cite travel outside of Canada.

Regional Differences in Levels of Optimism

About the data: Findings are based on an Ipsos Global @dvisor poll conducted October 2-16, 2012. The survey instrument is conducted monthly in 24 countries via the Ipsos Online Panel system. The countries reporting herein are Argentina, Australia, Belgium, Brazil, Canada, China, France, Germany, the UK, Hong Kong, Hungary, India, Indonesia, Italy, Japan, Mexico, Poland, Russia, South Africa, South Korea, Spain, Sweden, Turkey, and the US. An international sample of 18,000 adults age 18-64 in the US and Canada, and age 16-64 in all other countries, were interviewed.