Summer Vacation: What Americans Enjoy, Where They Go

More than half of Americans (54%) have already taken a vacation this summer or plan to, according to a recent report from Ipsos Public Affairs.

Age and family status are also major influencers: Younger respondents (58%), those with children (60%), and those who are married (59%), are more likely to vacation this summer.

Below, additional key findings from the report, which was based on data from a survey of adults in the United States age 18 and older.

Why They Don't Vacation

What They Look Forward To 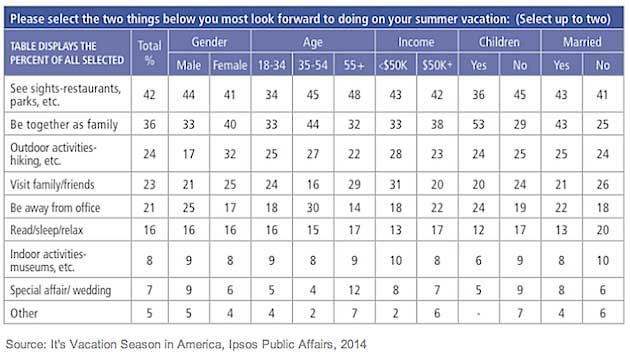 About the research: The report was based on data from the Ipsos US eNation online omnibus—a panel of five national online surveys. Each survey (wave of eNation) consists of a minimum of 1,000 completes with adults age 18 years or older in the contiguous United States.