Global Consumer Confidence Is Up, Led by North America

Consumer confidence around the world rose in the third quarter of 2014, according to a recent report from Nielsen.

Confidence in 3Q14 was up in 39 of 60 countries measured by Nielsen, compared with 31 countries in the second quarter. Overall, Nielsen's index moved up by one index point to a score of 98, up two points from the start of the year.

The Consumer Confidence Index measures perceptions of local job prospects, personal finances, and immediate spending intentions via a global online survey. Levels above and below a baseline of 100 indicate degrees of optimism and pessimism, respectively.

Regionally, consumer confidence in North America improved the most, rising four points to 107—a score that matches Asia-Pacific for the first time since the index began in 2005.

Confidence in the United States increased four points for the second consecutive quarter to reach a score of 108 in the third quarter. The rise continued an upward trend that started in the first quarter of 2013.

Confidence also increased in Canada, rising one point from the previous quarter to an index level of 103. 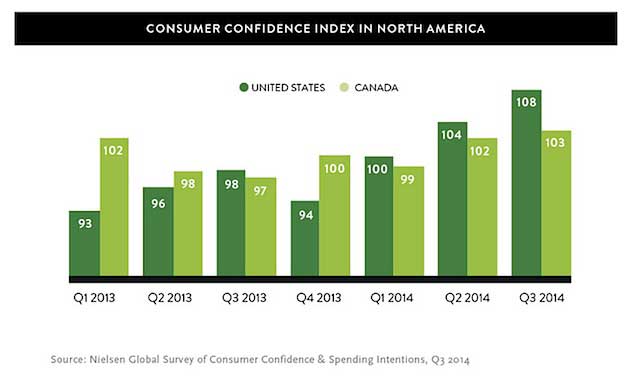 Consumer confidence increased by one index point in the Asia-Pacific region (to 107), three points in the Middle East/Africa (96), one point in Latin America (91), and one point in Europe (78) from the previous quarter. 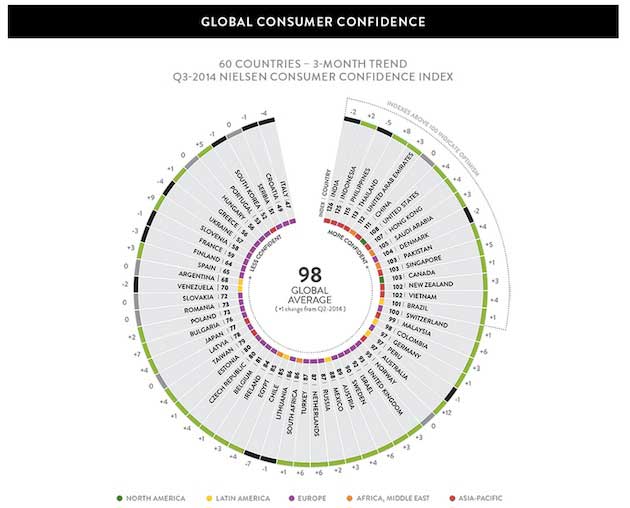 About the research: The Nielsen Consumer Confidence Index measures perceptions of local job prospects, personal finances, and immediate spending intentions via an ongoing global online survey of consumers in 60 countries.

You may like these other MarketingProfs resources related to Customer Behavior.

In times of crisis, people still prefer phone calls for customer service interactions, according to research from CGS.

B2B technology marketers say they want martech solutions to provide simple integration, the option to try before buying, and clear value, according to recent research from Sonus Research and the Tech Marketing Council.

How to Push Customers Down the Brand Loyalty Funnel

How do you determine when a customer is loyal to your brand? This article breaks down customers into five levels of loyalty, and outlines how to market to each level.

Why People Really Do What They Do: 'Primal Brain' Author Tim Ash on Marketing Smarts [Podcast]

Evolutionary psychology and digital marketing expert Tim Ash shares insights from his book 'Unleash Your Primal Brain: Demystifying How We Think and Why We Act.'

Do Customers Trust You? Six Tips for Earning Brand Trust in 2021

In the era of "fake news," getting someone to trust your content is not an easy task. But customers are more prepared to trust brands and businesses than other sources. Here's how to take advantage of it.

Unlocking the nuances of the human brain in relation to marketing is a fascinating area of study. Nancy Harhut joins us to talk psychology, behavioral sciences, questionable experiments, and how these all relate to marketing.