The State of B2B Sales and Marketing Data

Most B2B marketing/sales databases lack key information about prospects and customers, according to a recent report from NetProspex.

The report was based on an analysis of 223 million records in the databases of B2B companies. The researchers examined which commonly required fields were "missing" from each record (the report makes the assumption that each of these data points is necessary, which may not actually be the case for all companies).

Other common data points lacking from records included website domain (72% did not include), industry information (71%), phone number (54%), and title information (34%). 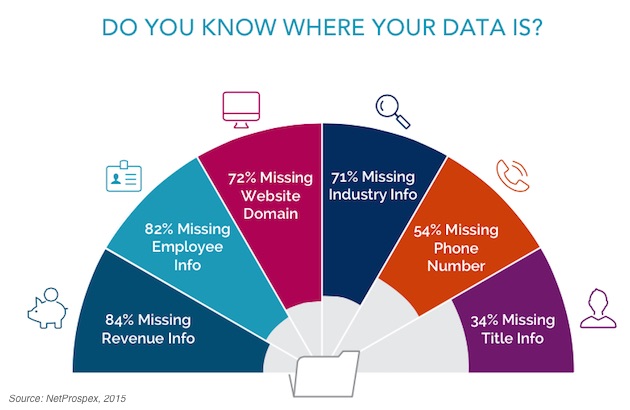 B2B companies in general are doing a good job of dealing with duplicate leads/customers, with 90% of databases containing fewer than 10% duplicates, the analysis found.

In contrast, more than half (54%) of the records analyzed did not include a phone number, and many others were inaccurate, making "phone connectability" poor overall.

About the research: The report was based on an analysis of 223 million records in the databases of B2B companies.