The State of User Experience: What Visitors Expect From Sites

Which elements of a website's user experience matter most to people? What makes them decide to continue using a site?

To find out, Limelight Networks conducted a survey in June 2015 of 1,302 Internet users in the United States, the United Kingdom, Canada, and Singapore.

Consumers say website performance (fast page-load times, no buffering of videos, etc.) is the the key to a successful digital experience, with 50% of respondents rating it as most important.

The next most important element is fresh and updated content (43% of respondents rank it as the top factor), followed by a consistent mobile to desktop experience (23%), and personalized content (15%). 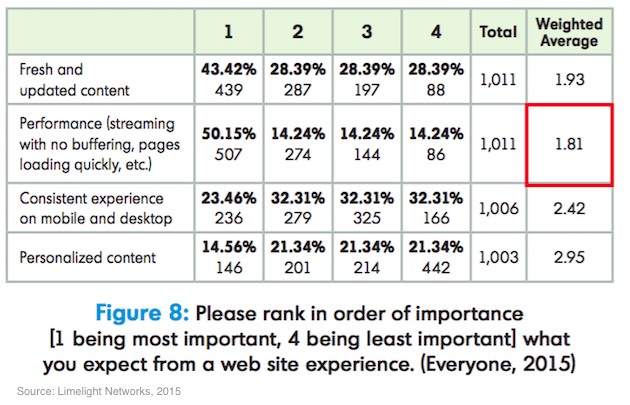 Interestingly, despite the importance of speed, fewer respondent say they would leave a website because of slow load time compared with last year, perhaps indicating increased consumer loyalty to certain sites.

Personalization is becoming increasingly important to consumers: 43% of respondents now say they want a website to remember them from a previous visit, compared with 27% in 2014.

Consistent performance on mobile devices is also becoming more important to consumers: Only 35% of respondents say they are willing to wait longer for a Web page to load on a phone/tablet than on a desktop (44% said they would wait longer in 2014).

About the research: The report was based on data from a survey conducted in June 2015 of 1,302 Internet users located in the United States, the United Kingdom, Canada, and Singapore.