Some 7.5% of essential contact information in B2B sales databases become outdated within three months, according to recent research from Radius.

The report was based on a Radius analysis of B2B database information, conducted between May and August, 2016.

The researchers took the original customer relationship management (CRM) data for 10,000 B2B contacts and re-examined it three months later, using Web research and calls, to determine whether the information was still correct.

For the database with 10,000 contacts, the researchers found that 757 of the entries were no longer valid (i.e., the person had moved to another job or was no longer be reachable) three months later.

Some 418 of the phone numbers had changed, and 252 of the email addresses had stopped being used. 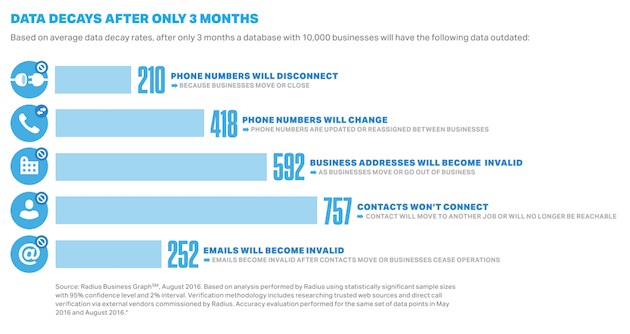 About the research: The report was based on a Radius analysis of B2B database information, conducted between May and August, 2016.