The Top 10 Companies on LinkedIn: Where Professionals Most Want to Work

Alphabet (Google's parent company) and Amazon are the large companies that LinkedIn members in the United States most want to work for, according to recent research from the social network.

The report was based on internal LinkedIn data collected between February 2016 and February 2017. The researchers looked at billions of actions taken by LinkedIn members in three areas: job applications (the number of views and applications to a company's job posts on LinkedIn); engagement (the number of views to a company's career page, etc.); and retention (whether employees staying with a company for at least a year).

Only companies with 500 or more employees were included in the data set. LinkedIn and its parent company, Microsoft, were excluded from the list.

Facebook is the third most popular company on LinkedIn with US members; Salesforce ranks fourth, followed by Uber, Tesla, Apple, Time Warner, The Walt Disney Company, and Comcast NBCUniversal.

Check out the full report to see the complete list of the 50 most popular companies with US LinkedIn members as well as rankings for LinkedIn members in Australia, Brazil, France, Germany, India, and the United Kingdom. 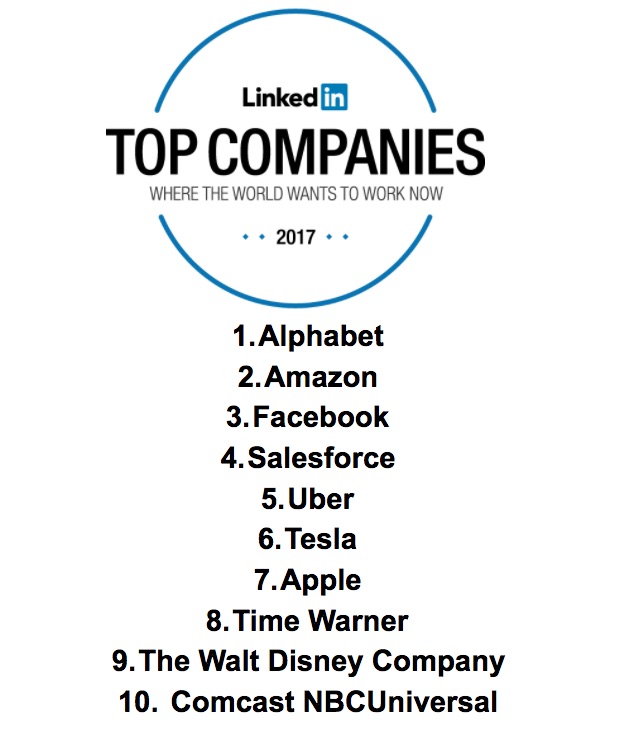 About the research: The report was based on internal LinkedIn data collected between February 2016 and February 2017.