Lucy Wyndham Read wanted a "no excuses" approach to fitness... so she joined the military. Mission accomplished: She quickly mastered the challenging fitness regimen and became a corporal, tasked with helping new recruits to get in shape.

After her fiancé, a fellow soldier, was killed in an accident, she left the military and started her own personal training business.

Lucy built the business from scratch, training a local celebrity for free so that the media would report on the fantastic results she achieved. Lucy parlayed that early success into a series of media appearances, kick-starting her career as a fitness and weight-loss expert, author, and celebrity.

She's the best-selling author of several books, including The Fastest Diet & Workout Ever, The No Gym Workout, and her latest book, Body Training for Women.

Her YouTube channel for LWR Fitness has more than two million views and has racked up more than 100,000 subscribers in just one year.

I invited Lucy to Marketing Smarts to discuss how she managed to build a successful business in a highly competitive industry and selling a service many people will never use (personal training and fitness advice).

Capitalize on your knowledge and experience to help people and you will build a viable business (05:11): "In the army, we did a lot of...[what]is massive now...HIIT training ['High-Intensity Interval Training'].... I've been doing it for 20 years.... It's really only in the last two or three years it's become a buzz in the fitness industry and everyone's talking about it. But I've always sworn by it, it's really good training. It's short little bursts of high intensity. With anyone, even complete beginners, the great thing is you just do it to your fitness level. Things like yoga and pilates are great. That's really more for relaxing, stretching, that's good for your mind, but I think as fitness goes, HIIT stuff is definitely good, and for me [the military is] where I really learned about it.... They never really trained us in the gym. It was just outdoors, so I think that's the great thing now. People are tending to want to do fitness now more at home or outdoors than perhaps to go the gym."

Knowledge is power, and sharing knowledge makes your content powerful (06:30): "I feel like I've been given a gift, really, and because I am very creative in how I explain things and with my personal training clients...it was very much like I would not just teach the client for an hour. I wouldn't get them just doing the workout. I'd be explaining to them as they're doing the workout why it's working. I'm a great believer in that knowledge is power.... So in my books and everything I do, I like to not only tell them 'do 10 squats,' but also explain them why we're doing those squats or why we're doing this exercise."

Sometimes you should work for free (at first) (11:14): "I found a local celebrity...and approached her.... At the time there was nothing like social media. It was just newspapers, magazines, and television. She was local, but did a bit of stuff on national TV. So I approached her and offered her free personal training.... It was one of the best business decisions. In business, you have to invest. You can't expect it all just to come to you. And so I trained her for about six weeks. She lost a stone and a half (21 pounds) and looked amazing. And a bit national newspaper did a big story on that. From that, all the local press picked up on it. I had, in one day, booked over 14 new clients, which normally in a gym that would perhaps take about a year to build up. It paid dividends doing that. Then I got approached by a  local radio program so I went on talking about fitness.... From that it kind of spiraled."

Pump up your audience through video content (13:35): "It was really only the last year that I have realized what a big platform [YouTube] is. I'm very excited... This time last year, in June of last year, I was at 5,000 subscribers, but in June I started really, really pushing it. In a year, I've gained 95,000 subscribers.... The beauty of that is...that people are now doing my workouts or they're buying the books and they're posting up their before and after photos, and because I do a lot on social media, they'll tweet them. We call it #LucysSquad now...and people are like, 'Where's her channel,' and then they join the channel and they share the videos."

Just say no to stock images—your audience deserves better! (15:37): "I edit all my own videos. I film everything. And I wanted to learn how to do it, so I self-taught and I literally would be from six in the morning until midnight. I still do that, but that's where I got that discipline, from being in the army. I got really messed around in the media with different people, ideas ripped off...and now I'm like, 'You know what, I can do it all on my own,' and that's what I've done....

"In all my books I use my own images. There are a couple of reasons. One, there are so many books and videos out there that literally just buy pictures off the Internet, so it's just recycled content. I like to always over-deliver. For my readers or for my videos, I want it to be fresh, new stuff. Also, from a personal trainer point of view, I know how to perform the exercise with good form, so if I'm in the pictures, then I can make sure I've got my shoulders pulled back. If you've got a model doing it, they'll look a million times better, but their technique might not be correct. So that's the two reasons why I like to do the stuff myself. It's more realistic and also it just means that will never be seen anywhere else." 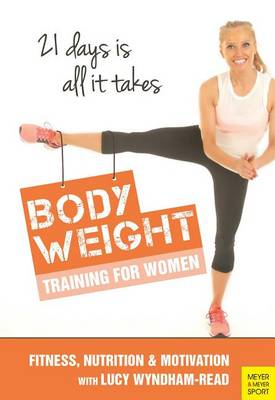 Lucy and I talked about much more, including what fitness and marketing have in common, so be sure to listen to the entire show, which you can do above, or download the mp3 and listen at your convenience. Of course, you can also subscribe to the Marketing Smarts podcast in iTunes or via RSS and never miss an episode!

Lucy Wyndham Read, international fitness and weight loss expert and best-selling author of books, including HIIT—High Intensity Interval Training: Get Strong & Sexy In Less Than 15 Minutes A Day. Her latest book, Body Toning for Women: Bodyweight Training, is available now. Subscribe to Lucy's YouTube channel, which has more than two million views and 100,000 subscribers to date.