The nonprofit Clearwater Marine Aquarium in Florida specializes in the rescue and rehabilitation of sick or injured marine life.

Not so long ago, the aquarium's own financial health was poor, and the organization was dangerously close to shutting its doors. But then, a wounded dolphin changed everything.

If you've seen the movie Dolphin Tale, you know the story of Winter the dolphin, who lost her tail after getting tangled up in a crab trap when she was just a baby. Her story has inspired millions of people around the world and brought many of them to Clearwater to see where it all began.

Since Dolphin Tale hit theaters back in 2011, attendance at the aquarium has increased more than tenfold, from 75,000 annual visitors to 800,000.

"Sure," a skeptic might say, "anyone can drive traffic and merchandise sales if they have a hit Hollywood movie that tells their story." But all businesses have stories to tell. Are you sharing your organization's stories with people who can help spread the word?

To be sure, Winter's rescue and its impact on the Clearwater Marine Aquarium is a compelling story, but no one would have heard it if the nonprofit's small staff hadn't worked relentlessly to share that story with local media and online audiences. So how did they do it?

I invited Clearwater Marine Aquarium's chief marketing officer, Bill Potts, to Marketing Smarts to talk about how the small nonprofit turned an emotionally compelling story into a shared cause that inspired people all over the world, completely turning things around for the organization.

Actively look for compelling stories within your own organization and its audience (07:16): "The Dolphin Tale movie in its first weekend was number one at the box office and it was released in 42 countries. The impact was a little bit expected but also a little bit surprising, and the piece that resonated even stronger than we anticipated was the inspirational nature of that movie. At the end of the movie, you see a little girl drive in from Atlanta and get out of her van in a wheelchair because she's inspired by Winter and the message 'if I can, you can.' And that has happened every day since the movie came out, in droves.

"I could walk out right now and find 30 stories of people that have been inspired by Winter and her story of survival and perseverance. I would find Make-a-Wish kids, I'd find wounded warriors with missing limbs that are here all day every day because of how Winter has changed their lives....

When you have a compelling story, make sure it gets heard (11:47): "[We] started with the local media, both television and also the print publications, and then reached out through contacts that we had here to the TV networks and spun out pretty aggressively on the international side.... When there's a great story to tell, there's plenty of folks to listen. All we were trying to do here was tell the story of what was happening. And it was special, it was unique, it was amazing, it was inspiring, and so the media was happily picking it up.."

Make the most of your first-mover advantage (12:38): "We've been pretty aggressive on...the technology side. We've got millions and millions and millions of people dialing in to look at our webcams every year. Predominantly they want to see our dolphins, but there are also a lot of folks who want to see our otters and our turtles. Those are multiple cameras operating 24/7, and it's a great promotional platform for us for people to be able to see what we do even though they can't be here."

"We were early on the Facebook Live webcasting side. Because Winter is a celebrity, we were allowed by Facebook to do live webcasts well ahead of the general public, so we've been executing live webcasts...since last year. We get tremendous opportunities to share our mission with folks around the world.... We did a release of a loggerhead turtle on June 21st and we did a live webcast ahead of the release and we did a live webcast of the release, which was pretty spectacular. Between those two live webcasts for that one particular release we had half a million views on Facebook.... We do those minimally three times a week."

Don't be afraid to live-stream (but do plan first) (11:54): "Part of the beauty of the live webcasts is that they're a little bit raw. They're not super-rehearsed. They really are authentic.... We focus on the animal, we focus on the story, and we don't script it. We have an outline of what we want to be reviewed during the live webcast, but we make sure they're naturally delivered. They're really not rehearsed. They just happen. We do schedule and plan them, and we do know what's going to be discussed, but we make it really authentic. It's a one-take deal."

To learn more, visit SeeWinter.com, and be sure to add "CMAinspires" to your contacts on Snapchat and subscribe to the aquarium's Facebook updates! You can also follow CMA on Twitter at @CMAquarium. (You can even vote for Winter for President!) 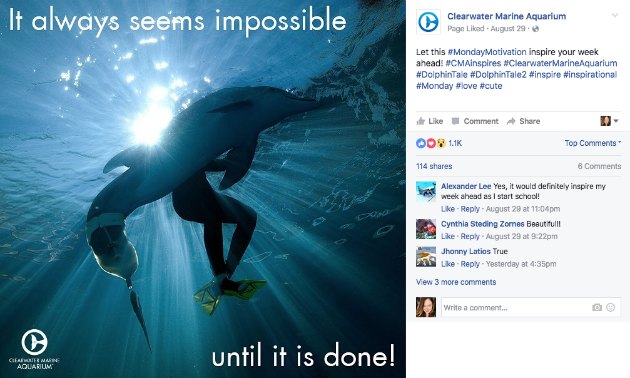 Bill and I talked about much more, including crisis communication planning, employee advocacy, and tips for live-streaming, so be sure to listen to the entire show, which you can do above, or download the mp3 and listen at your convenience. Of course, you can also subscribe to the Marketing Smarts podcast in iTunes or via RSS and never miss an episode!

Bill Potts, chief marketing officer at the nonprofit Clearwater Marine Aquarium. Follow the CMA on Twitter @CMAquarium and subscribe to the aquarium's Facebook updates for the latest on 'Dolphin Tale' stars Hope and Winter.