Why Your Company Needs a Chatbot (and How to Get One): Bot Academy Founder Andrew Warner on Marketing Smarts [Podcast]

Andrew Warner spends a lot of time on Facebook Messenger, but his business hasn't exactly suffered. In fact, it's booming! Because Andrew isn't whiling away the hours: He's refining the use of chatbots to help companies reach potential customers and nurture them through conversion.

Andrew's early involvement with two chat-messaging-platform companies inspired him to build Bot Academy, an online program that teaches people how to create marketing chatbots. He's also the founder of Mixergy, where he invites proven entrepreneurs to teach others how they built their startups.

I saw Andrew speak several years ago at the World Domination Summit, and I've wanted to interview him ever since. I invited him to Marketing Smarts to talk chatbots: what they are, how they work, why you need one, and how you can get one.

Andrew goes into detail on how chatbots enable companies to reach potential customers via Facebook Messenger instead of email. If you're interested in talking to prospects where they are, this interview will help you!

Internally, many companies use chat to communicate, so why do you rely on email to talk with your external audience? (03:32): "In the world today, people are not using email as much as their using chat apps—iMessage, Facebook Messenger, Slack, etc.... This is the way the world is going. At some point I said to myself, 'If the world is like that, if my team and I are chatting to each other, why are we writing emails to our customers? Why are we sending them this stuff that we don't love and we don't use internally?' And I realized our open rates aren't great, our click rates aren't great, we've maximized it as much as we could, we hired all the experts, and we still couldn't get it where it needs to go, so I said, 'I know there are lots of uses for chatbots. How do I create a bot that lets me send messages to my audience using the chat apps that they love instead of email, which they're using less and less of?'"

Facebook temporarily banned new chatbots, but that was actually good for marketers in the long term (10:06): "Facebook said that they were not going to allow people to create new chatbots. I was very happy about that. People were doing things they just shouldn't have done in chat. They were doing things like just sending out nothing but ads, and Facebook explicitly from the beginning said you cannot send an ad to someone unless they recently interacted with your bot. And you can't have a bot that does nothing but ads. For a while, Facebook wasn't policing it, so [instead] they stopped allowing new chatbots and they examined the platform and I'm glad that they did it. Frankly, I'd love for them to do even more cleanup. People are getting away with murder. They're profitable, and so they're happy about it, but it's just not right for the platform."

Embracing chat doesn't mean abandoning email (16:30): "Here's the easiest thing that you can do: Anyone listening to me, if they have email marketing that's working right now, just stick with it. I'm not telling you to get rid of email, but you know that confirmation page after somebody subscribes where you say, 'Hey, go check your email?' How about there you can say, 'Can I just send you this thing I promised you, via chat,' and have a single button. As soon as they press the button, they're subscribed to your chat messages. So, I'm just saying, keep your email marketing if that's working for you, and then say, on the confirmation page, 'You can also sign up to chat.'"

Chat can drive immediate action at twice the rate of email (17:39): "I do webinars every two weeks with our audience. When you sign up for one of my webinars, as soon as you sign up, I used to say, 'Here's a link to add it to your calendar.' I used to say, 'I will follow up with you the day before and remind you to show up.' Nobody looks at their calendar. I do. You probably live by your calendar. Most people don't. Nobody looks at their email an hour before a webinar. Or looks at it and says, 'Oh yeah, I better make sure that I'm there.'

"So what we did was, after people gave us their email and registered, the following page said 'can I send you a chat message a few minutes before we go live so you don't miss this? All you have to do is press the button.' They press the button, and now they're subscribed. And so three minutes before I go live, they get a message on their phone that says, 'Hey, your webinar is about to start, tap here to see it.' They tap, and they show up at the webinar. That's really effective, instant responses.

To learn more, check out the chatbot Andrew set up for Marketing Smarts listeners! You can also visit BotAcademy.com, or follow Andrew on Twitter: @AndrewWarner. 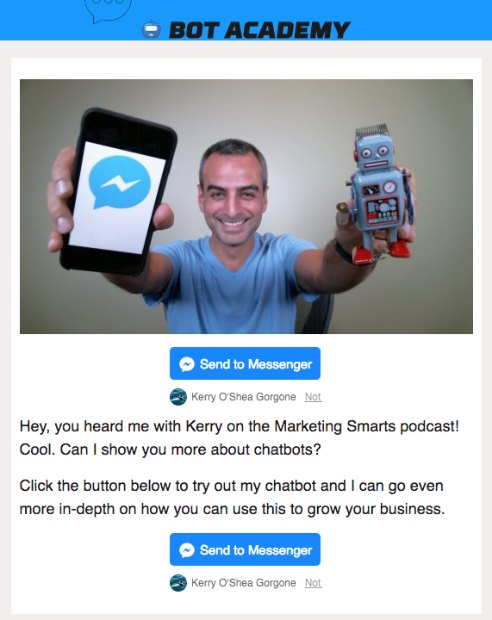 Andrew and I talked about much more, so be sure to listen to the entire show, which you can do above, or download the mp3 and listen at your convenience. Of course, you can also subscribe to the Marketing Smarts podcast in iTunes or via RSS and never miss an episode!

This episode brought to you by GoToWebinar:

GoToWebinar makes it easy to produce engaging online events. Whether you want to connect with your prospects, customers or employees, GoToWebinar has the tools and analytics you need. Start creating interactive and educational webinars your audience will love.

Andrew Warner, founder of Bot Academy, an online program that teaches people how to create marketing chatbots, enabling companies to reach potential customers via Facebook Messenger instead of email. He's also the founder of Mixergy, where he invites proven entrepreneurs to teach how they built their startups. Follow Andrew on Twitter: @AndrewWarner.