As marketers we love—yet fear—the idea of being different. We need to stand out from competitors to gain and keep attention. Our points of differentiation help us to attract the right audience. On the other hand, we're sometimes reluctant to stray too far from established approaches, proven through case studies.

But, as Jay Baer often says, in order for marketing to be successful, it must be "remarkable" in the classic sense: it must spark conversation.

No one sparks conversation better than Jesse Cole. Often seen sporting a yellow tuxedo (complete with a yellow top hat), Jesse is the founder of Fans First Entertainment and owner of the Savannah Bananas.

His teams have welcomed more than 1 million fans to their ballparks. He's received awards for Organization of the Year, Entrepreneur of the Year, and Business of the Year. His summer league baseball team, The Savannah Bananas, has sold out every game for three straight seasons.

Research by a university professor has shown that ball players perform better as part of the Savannah Bananas organization than they have at any other point in their career. Employees in the front office flourish, as well. Turnover is well below average, even though the staff includes a large contingent of Millennials, who have a reputation for "job hopping."

Jesse's success is all the more impressive because, at first blush, it seemed so unlikely. Professional baseball had languished in Savannah for 90 years.

Many residents and officials thought the team's name, suggested by an area resident, was a joke. But Jesse knew that no run-of-the-mill team name was going to get people's attention. "The Savannah Bananas," on the other hand, presented him with endless opportunities for cheeky, irreverent marketing that would get people talking.

Instead of cheerleaders, the organization boasts a unique senior citizen dance team, "The Banana Nanas." The team's "behind the scenes" video series is called "Bananas Unpeeled." I could go on (and on and on), but you get it.

I asked Jesse to join me on Marketing Smarts so we could talk about how he revitalized baseball in Savannah, not by scheduling baseball games but by "creating a circus where a baseball game breaks out."

Get crystal clear about your real mission and focus (06:05): "I took over [as General Manager of the baseball team in Gastonia] and began to try new things and experiment. We had nothing to lose. No one was coming [to the games] anyways… We started being clear on having fun and not taking ourselves too seriously.

"And what happened is we started drawing people that weren’t baseball fans. And when someone says, 'Oh I don’t like baseball,' I say, 'Perfect, you’ll love our shows.' We don’t even talk about them as games. We say 'Welcome to the show.' 'Did you enjoy the show?' 'It's showtime!' That’s our terminology because we can control the show; we can't control the game. So, for us, we're playing a dramatically different game."

Stop overthinking. Just do something and learn. (12:03): "I think we're so used to sticking to the status quo 'Well this is the way it used to work.' Things are changing dramatically every single day. People want things faster, quicker. They want things more convenient, they want things at a better price, and they want to be entertained. Everybody wants to be entertained! It was painful, it was hard. It was an unbelievable learning experience.

"Do it and learn. So many times we're out there thinking and thinking and thinking. Start doing! When you start doing, that's when you can see: Does it actually work? And everyone says,'Oh you must have had tons of failures.' I'm sure we have, but we just keep trying new things and we move right past it. We don't even think of them as failures. It's 'What did you discover today?'"

You don't need a marketing plan, you need an attention plan (19:42): "Attention beats marketing 1,000% of the time. We marketed like everyone else the first six months. We did social media, we did newspaper, we did digital... and no one cared.

"But once we got the attention, that’s when everyone came into our funnel and were like, 'Wow, I’m intrigued on what these guys are saying.' So I would say: companies should not have a marketing plan. They should have an attention plan.

To learn more about Jesse's approach to personal branding, pick up a copy of his book, Find Your Yellow Tux: How to Be Successful by Standing Out. 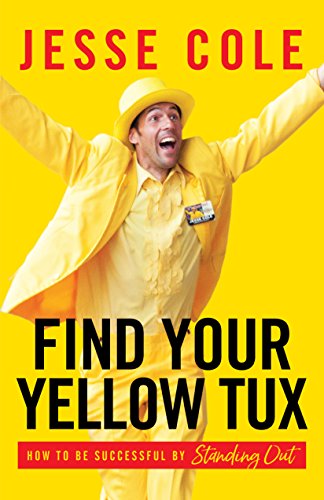 And be sure to check out the Savannah Bananas online and follow the team on Twitter: @TheSavBananas.

Jesse and I discussed much more, including the unique way he and his wife met, so be sure to listen to the entire show, which you can do above, or download the mp3 and listen at your convenience. Of course, you can also subscribe to the Marketing Smarts podcast in iTunes or via RSS and never miss an episode!

This episode brought to you by GoToWebinar:

GoToWebinar makes it easy to produce engaging online events. Whether you want to connect with your prospects, customers or employees, GoToWebinar has the tools and analytics you need. Start creating interactive and educational webinars your audience will love.

Jesse Cole, founder of Fans First Entertainment and owner of the Savannah Bananas summer league baseball team. He's the author of Find Your Yellow Tux: How to Be Successful by Standing Out . Follow Jesse on Twitter and follow the team at @TheSavBananas!