The Grateful Dead carried the love of improvisation they put into their music into many aspects of their business as well—including their branding. Album covers, backstage passes, newsletters, and posters were adorned with rich graphics dripping with color, detail, and imagery.

As with their concerts, you never knew what you were going to get when you bought an album, happened upon a concert photo, or received a newsletter. While the band reused certain images consistently—roses, skeletons, skulls, dancing bears, and the "Steal Your Face" logo—how these images were used varied wildly. The font and color of the band's name changed from album cover to concert poster to newsletter. Sometimes you get a very cool album cover unlike anything you'd seen before... and sometimes you'd get something that left you shrugging your shoulders and thinking, "huh?"

The Grateful Dead carried their love of improvisation into their branding.

The Grateful Dead's branding, which was constantly changing and evolving, was in direct contrast to what other bands did. When bands like the Rolling Stones went on tour, they usually had a theme that coincided with the album they were promoting at the time. Branding was tightly controlled and carried through to all elements of their marketing: posters, T-shirts, stage sets, etc.

The Grateful Dead, on the other hand, never really adhered to a promotional theme when touring. Poster art sometimes changed from show to show—even for concerts held just days apart.

From a design perspective, the Grateful Dead incorporated a carefree approach in their graphics that you didn't see with other, more carefully managed bands. The Grateful Dead's improvisational branding also showed that they knew their audience well—one that embraced nonconformity and freeform thinking in its art and music.

Too often companies hold tight to their branding. Marketing communications departments dictate how a company is to use a logo and corporate colors—with one person in a department billing himself or herself as the "logo police"—and woe be unto anyone who steps out of line.

When David worked at NewsEdge Corporation, for example, a business unit displayed the company logo against a map of the world on its datasheet—a complete violation of "corporate branding guidelines." The offending product managers were taken to task, told to remove the "nonofficial" image, and to reprint their datasheets, which had cost thousands of dollars. 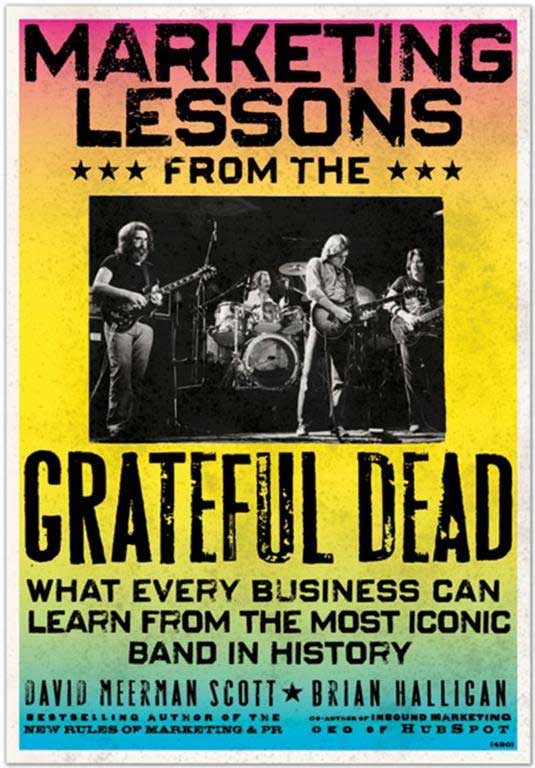 Of course companies need branding guidelines—we're not advocating that you do away with how and where your corporate logo is to be used. Holding tight to branding, however, stifles creativity. Instead of congratulating a product marketing team for taking the initiative to create something new, the branding police clamp down—and effectively shut off new ideas.

The Grateful Dead teaches us to show our brand's playfulness and to trust that our customers will recognize our brand even if it looks a little "different."

When designing your websites, e-books, whitepapers, and social media profiles, give your design professionals some leeway. Yes, you want them to follow your corporate design standards, but let them deviate from those standards as appropriate. Professional designers know how to exercise their skill and incorporate fresh ideas without deviating completely from your brand.

By loosening up your brand, you allow your company to show its personality—and, by extension, its ability to roll with the punches.

Google Lightens Up Its Image With Doodles

One company that's passionate about protecting its logo is Google. Although the company allows people to use screen shots of search results pages in their blog posts, e-books, and printed books, people cannot use the Google logo in movies or TV shows without express permission. And, use of the logo on merchandise and clothing, or third-party marketing materials such as tradeshows, is expressly forbidden.

Yet Google also has a rich tradition of modifying its logos for special events. Called "Google's Doodles," these whimsically designed logos celebrate everything from Jackson Pollock's and Van Gogh's birthday to the 50th anniversary of the LEGO brick and Sesame Street. The doodles, stylized versions of the colorful Google logo used on the Web search page, frequently celebrate holidays. Halloween is a favorite.

When Google developed its first doodle in 1998 (a stick figure behind the second "o" in Google to commemorate the Burning Man Festival), the company had no idea how popular the doodles would become. People now collect them and write blog posts whenever a new one appears.

Rather than rein in its designers and keep them from "misusing the logo," Google has made Google's Doodles part of its brand: "While the doodle is primarily a fun way for [Google] to recognize events and notable people, it also illustrates the creative and innovative personality of [our] company, " the company says on its corporate site.

Like most companies (including the Grateful Dead), Google protects its image and branding and requests that you not use its logo without permission. But unlike most organizations, the company shows its personality through design, like the Grateful Dead do. The playfulness and confidence that's part of its corporate DNA shines through, permitting its design team to change its logo on a regular basis—even to the extent that you might not even recognize the logo, as was the case when Google honored Jackson Pollock's birthday: On January 28, 2009, the Google logo looked like something a two-year old might create: a drawing full of scribbles.

Give your designers leeway to play with your branding elements and invite customers and followers to share their ideas.

You can maintain strict control over your brand in-house, but you quickly lose control once your brand is online. People can use your theme song in videos and add your logo to blog posts. Instead of fighting back, post the more creative among those videos and other content to your own website. Or why not crowdsource the next design that you need by creating a contest for young designers to take a crack at, say, your tradeshow booth graphics?

No matter what you do with outside people, you should certainly let your in-house and chief outside designers come up with new ideas that loosen up your brand... while still maintaining your corporate image.

Note: This article is excerpted from the book Marketing Lessons from the Grateful Dead: What Every Business Can Learn From the Most Iconic Band in History (August 1, 2010 by John Wiley & Sons) by David Meerman Scott and Brian Halligan. Used with permission.

David Meerman Scott, B2B marketing powerhouse and fandom strategist, spotted the real-time marketing revolution in its infancy and wrote five books about it including The New Rules of Marketing and PR, with more than 400,000 copies sold in English and available in 29 languages.

Now, David says the pendulum has swung too far in the direction of superficial online communications. Tech-weary and bot-wary people are hungry for true human connection. Organizations have learned to win by developing what David calls a "Fanocracy"—tapping into the mindset that relationships with customers are more important than the products they sell to them.

Prior to starting his own business, he was vice president of marketing for several publicly traded B2B technology and information companies.

Brian Halligan is co-founder and CEO of HubSpot Inc. (www.hubspot.com) and author of the book Inbound Marketing. He is an Entrepreneur-In-Residence at MIT, where he teaches classes on marketing and strategy. Contact Brian via Twitter: @bhalligan.