Is Your Email Subject Line Creative... or Deceptive?

"It is unlawful for any person to initiate the transmission to a protected computer of a commercial electronic mail message if such person has actual knowledge, or knowledge fairly implied on the basis of objective circumstances, that a subject heading of the message would be likely to mislead a recipient...regarding the contents or subject matter of the message..."

How's that for some legalese? That's the actual language from the CAN-SPAM Act of 2003 (PDF), the law that establishes the rules for commercial email in the United States.

I'm not an attorney, but the intent of that language seems quite clear to me. Put in non-Franken-speak, it can be boiled down to this: Don't send an email with a deceptive subject line.

So where does the line get drawn between a creative, compelling email subject line and one that is deceptive (and possibly illegal)?

An interesting conversation has been going on among email marketing folks lately around this very topic. I've argued that there is power in a compelling subject line: If you want people to open your emails, your subject line has to stand out in their (likely crowded) inbox.

That's not to say a "boring" subject line can't also be effective. My colleague Chris Penn proves that point with his weekly newsletter, the subject line of which reads, "Almost Timely News from @cspenn for [date]." The only part of his subject lines that changes week to week is the date, and his open rates have been hovering around 13%.

But a creative, compelling subject line certainly can get your attention. Urban Outfitters is one of my favorite examples. YOLO OMG WTF Sale! was the subject line of a recent email it sent to its list. (Read about more "crazy" subject lines.).

Subject lines that stand out are not limited to B2C email. Even the President of the United States—well, his team—crafts some unique, catchy, subject lines. The Obama Campaign released some of the data behind its email marketing messages. Subject lines such as "Join me for dinner?" "It's officially over," "It doesn't have to be this way," and "Wow" were among the ones that the campaign used.

Extensive testing found that a casual tone was usually more effective. "The subject lines that worked best were things you might see in your in-box from other people. 'Hey' was probably the best one we had over the duration," according to Toby Fallsgraff, the campaign's email director. So, were the Obama email subject lines creative or deceptive?

Copyblogger decided to test out "Hey" as the headline in a blog post—one it also repurposed as an email with the same subject line. (Be sure to read the comments in that post, too, as there are quite a few insightful nuggets there.) Suffice it to say, it's not always about the subject line. In many cases, the from name—literally who the email is from (the sender)—can be the difference between an open and an ignore/delete/mark as spam.

Back to email subject lines: Where is the line between deception and creativity?

A friend recently forwarded to me an email from Oxfam that had the following subject line: Did I leave my jacket at your place?

When you open the email (see below), the first line after the salutation reads, "It's Aziz Ansari. And of course I didn't leave a jacket at your place. I've never been to your home." It continues, "But I'm glad you opened this email, because I actually want to talk to you about something much more important." 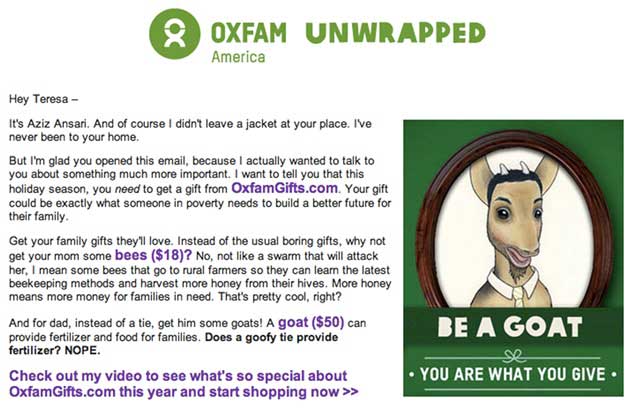 Was that subject line creative, or was it deceptive?

As you can see from those examples, the line between creative and deceptive can be a fine one. In many cases, it depends on who is reading your email. Much like the language around subject lines in the CAN-SPAM Act, "creative or deceptive" is up for interpretation.

However, you do have a few ways of ensuring that your subject lines fall closer to the creative side of the spectrum:

1. If the subject line is aligned with the contents of the email, it's probably closer to creative than deceptive. In the Urban Outfitters example (YOLO OMG WTF Sale!), the image and the copy of the email speak directly to a big (crazy!) sale. The Copyblogger subject line (Hey...), is a little bit less clear. Though the email does talk all about headlines and subject lines—and references "Hey... "—it is not really about the word "Hey." The Oxfam subject line (Did I leave my jacket at your place?) clearly had nothing to do with the contents of the message, as Aziz himself said!

2. If the subject line has you thinking (or shouting!), "I can't wait to open this email," it's probably closer to creative than deceptive. Again, look at the Urban Outfitters example. I don't know about you, but I could not wait to open an email that used not one, not two, but three popular acronyms followed by "Sale!" The contents of the email did not disappoint. On the other hand, I did not have the same reaction after reading "Hey" from the Copyblogger email... though I did open it.

3. If the subject line has you thinking one thing, yet when you open the email you are disappointed... it's probably closer to deceptive than creative. The Oxfam subject line fits that description—for me. I really thought someone had left their jacket at my house. Then, again, my wife and I had had guests over the night before. I felt a bit deceived when I opened the email and learned what it was really about. However, considering I'm a huge fan of Aziz Ansari and Parks and Recreation, my feelings of deception soon dissipated.

Before you send your next email marketing campaign, consider the subject line you are using. Will it have your subscriber jumping out of their seats to open? If so, when they open it, will they still be equally as excited? If so, it's likely you have yourself a creative subject line.

DJ Waldow is an email marketing consultant, writer, blogger, speaker, founder and CEO of Waldow Social, and co-author of The Rebel's Guide to Email Marketing.