What's New With the New Rules of Marketing and PR?

If there's a bible for this new media world in which we do business, it's David Meerman Scott's The New Rules of Marketing and PR. Originally published in 2007, New Rules has since sold more than 300,000 copies in more than 25 languages, from Bulgarian to Vietnamese. What's more, it ignited a movement that embraced social media and content as a cornerstone of business communication.

For me, personally, this is the book (along with the Cluetrain Manifesto) that changed the way I approach marketing—from mostly outbound to mostly inbound—and shifted my thinking about the nature of the buyer-seller relationship.

It's also the book that served as godparent to my own book (with CC Chapman), Content Rules. David wrote the foreword as well as acted the role of (alternatively) encouraging adviser and motivational boot camp drill sergeant!

A revised and updated edition (its fourth!) of the classic is out this month. David and I had a chance to sit down and talk about what's new in new marketing, and whether the new rules are still... well, new. 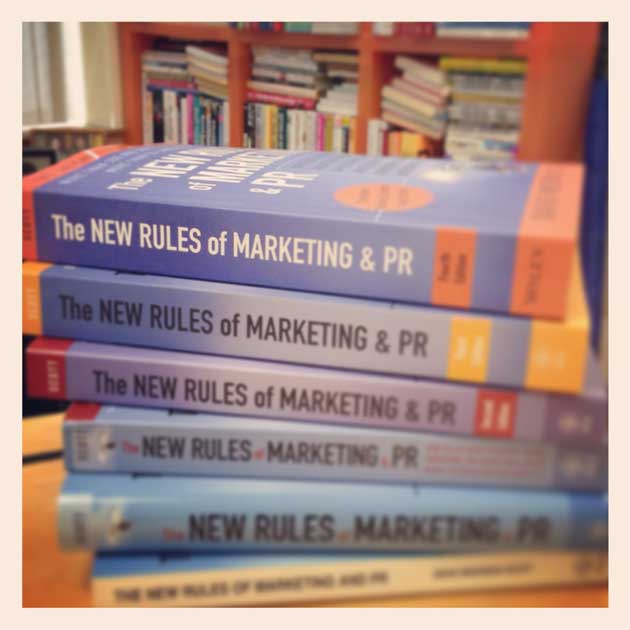 You've seen a lot changes since the original New Rules came on the scene. What has surprised you since then?

The biggest surprise for me is that the ideas I starting writing about way back in 2004 are now mainstream. Damn is that exciting! When I was writing the first edition of The New Rules of Marketing and PR, Twitter didn't exist and Facebook was only for students. The iPhone had yet to launch. We were in the early stages of the revolution.

And there have been some great "new rules" success stories, too.

Barack Obama was reelected president of the United States in November 2012. While there are many reasons for his winning a second term, one that stands out is his campaign's use of online engagement. What was once esoteric is now mainstream.

The Obama campaign used social networking to reach voters, rather than just advertising to them online, as the Romney campaign frequently did. And people responded by showing their online support.

Against that backdrop, we might well speculate that voters engaged with the Obama campaign online may have made the difference in the election.

Also in early November 2012, Hurricane Sandy barreled up the US East Coast, causing billions of dollars in damage and knocking out power to tens of millions of people. Companies helped victims in the immediate aftermath by publishing helpful information. For example, Duracell used its Facebook page to alert people to the availability of mobile recharging stations set up in areas without power, so consumers could charge their mobile phones for free. Using the Web to drive people to an offline initiative is an important aspect of the New Rules.

It's amazing to me that over four editions, the New Rules has become a classic international bestseller. I'm stunned that the ideas are used in organizations around the world.

This fourth edition of the book builds on the completely revised third edition with another extensive rewrite. I have checked every fact, figure, and URL. But I've also listened. In the past few years, I've met thousands of people who have shared their stories with me. I have drawn from those experiences and included many new examples of success.

I've made other, more significant additions as well. The real-time Web has sparked a tremendous opportunity for reaching members of the media directly—as they are writing breaking news stories. So I've added a brand new chapter on "newsjacking," the technique of injecting your ideas into a breaking news story to generate tons of media coverage. And in the time since I wrote the third edition of the book, marketing using images has exploded. So I've added a chapter on highly visual social networks like Pinterest and Instagram, as well as the use of Infographics.

And since there have been so many tremendous changes to marketing and public relations since the first edition was released, I created a SlideShare to show the evolution of the tools we take for granted today, like Foursquare, Google Plus, and many others that didn't exist just a few years ago:

I anticipate one day that these ideas won't really be "new." But not any time soon. Why? Because millions of people still do marketing and public relations using only the "old" rules.

They generate attention only by buying advertising and by traditional pitching of reporters—not by creating content on the Web. They advertise in the telephone book but aren't on social media. In the B2B world, they spend all of their time sitting in a tradeshow booth.

Since there are still so many people who haven't begun creating the sort of content that connects with buyers and gets shared on social media, there are still those people for whom the ideas are "new."

And for all the rest of us... there are always new stories to learn from!

Continue reading "What's New With the New Rules of Marketing and PR?" ... Read the full article