We use hashtags to contribute to industry conversations and clever Twitter memes. Some people use hashtags #to #randomly #emphasize #words #needlessly. If #hashtags were human, they would have already written a song about their plight and blasted it over the #iHeartRadio airwaves.

Hashtags do not get enough credit. Hashtags are powerful, useful tools for marketing, communication, and driving engagement. In fact, almost every social network has implemented a hashtag system over the past couple of years, and hashtags are an excellent way to break through the noise of the Internet to better communicate with a valuable audience.

If I were to pinpoint the one industry that has the most potential to harness the power of hashtags, it would be the music industry—which is already known for its innovative digital marketing techniques (for example, note the smartphone-app release of Jay-Z's Magna Carta Holy Grail).

So, I researched the music industry's best examples of hashtag usage across Twitter, Google+, and Facebook. Use these examples as hashtag inspiration to market your music and improve your audience's experience.

In the right context, it is completely acceptable to hijack popular hashtags to promote your own music. The people using the hashtag are already interested in the musical style and artist represented by the hashtag, so they're prime candidates to be fans of your music as well.

This image shows an example of Team Hollywood Ending hijacking a Tennessee Kids (#TheTNKids) hashtag to share their music with people following the same hashtag: 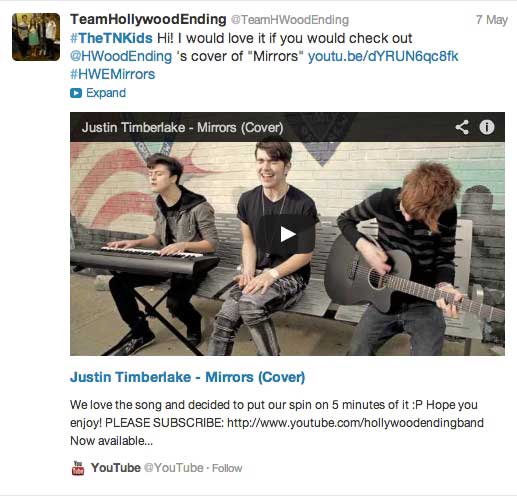 2. Build anticipation around a new release

Justin Timberlake used a hashtag on multiple social networks to post pictures, videos, and other media assets to build anticipation around his album #The2020Experience. Of course, JT's fans were thrilled to assist in building album anticipation, and so adopted the hashtag as well.

Using a hashtag to promote an album is an excellent way to gauge fan excitement surrounding an album release. With a hashtag tracking tool, you can visualize the amount of chatter about your new album and find out who your biggest fans are. Hint: They'll be the ones using the hashtag the most.

In April 2013, Twitter released a new service built around the hashtag #music. From Twitter.com: "It uses Twitter activity, including Tweets and engagement, to detect and surface the most popular tracks and emerging artists. It also brings artists' music-related Twitter activity front and center: go to their profiles to see which music artists they follow and listen to songs by those artists. And, of course, you can tweet songs right from the app."

The app was designed to showcase emerging and popular artists' music, along with a simple way to share music directly to your Twitter followers. Bands looking to make it big should be aware that the app uses various elements from Twitter profiles to populate recommendations and similar artists. The app also shows listeners "artists followed by [@artist name here]," so work hard to cultivate a genuine Twitter presence that shows love to your fellow bands in order to receive maximum impact from #Music.

Engagement is one of the primary reasons to use social media sites in the first place. On Twitter, artists can connect with fans using a hashtag-fueled question-and-answer session.

For example, #askjt was a simple way to drive engagement and generate fan buzz:

Twitter offers a few tips on how to host these sessions best: "It's often best if these hashtags are specific to the subject of the questions, for example when Twitter hosted a town hall with the White House we used the hashtag #AskObama to make it clear that users' Tweets would be read directly to the President. Unique hashtags can sometimes appear in the list of trending topics and the discussion can often continue even after the official event is over." 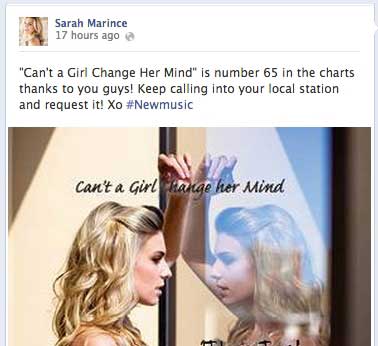 Fans and artists on Facebook have opted to use #NewMusic to find, share, and promote new artists. Artist Sarah Marince used #newmusicto announce that her new song was ranked #65 on the charts.

If drumming up new fans is your aim, then use #newmusic in Facebook updates—and your fans, learning by example, will likely follow suit.

For the more sophisticated music marketer, I recommend checking out the ad targeting capabilities of both Twitter and Facebook. Through those capabilities, you can pay to have messages about your music placed directly in front of an audience that is already using hashtags relevant to your fan base.

Remember: Musicians and marketers have the ability to market directly to those using a specific hashtag. For example, when tour merchandise is released on the online store, artists can advertise to people using the hashtag with a special discount code for fans. The possibilities are endless—and they all stem from the humble hashtag.

7. Give your fans a community with a hashtag

Instead of making it all about your music and your albums, turn the attention back on the fans. Whether or not you're a fan of his music, you should recognize that Justin Bieber is a Twitter master. Bieber uses Twitter to become a real, everyday voice in the lives of his fans. He @-replies them by name, favorites their tweets, and even follows back, becoming more than some distant superstar—he's a friend.

One way he embraces his fans is by tweeting hashtags that relate to his "Beliebers." As in the following example, he uses a hashtag to bring his fans together in one cohesive place. Fans can all contribute to the #MyBeliebers conversation, enjoying a digital space to interact with each other and geek out in their fandom.

The numbers don't lie: That's an impressive number of retweets for 29 characters.

The possibilities for music promotion with hashtags are endless, but always keep in mind that genuine engagement and conversation trump self-promotion. Smart execution of the hashtag can help you find new listeners with your own unique sound.

Continue reading "The Power of the Hashtag in Promoting Music (and Just About Anything Else)" ... Read the full article

Kyle Lacy is senior manager of content marketing and research at ExactTarget.