Einstein Told Me the Secret to Effective Online Marketing

I got to interview Albert Einstein. It was insane. Here's how it all went down.

First, let me tell you, as a blogger and podcaster I have a fairly high success rate for getting interviews with all kinds of interesting people. As you know, interviews with experts make for compelling content.

Booking time with Einstein was a bit tricky, though. He's a big shot. I figured some of the usual preparatory tactics (commenting on his blog, tweeting, book reviews, etc.) wouldn't work.

We're talking about a Nobel Prize winner here. What are the chances he'd discover me via social media?

Sometimes I introduce myself to these industry celebs at conferences, but it seems Albert's never gone to an online marketing event and is never going to. The word is he's mostly into science. I don't think I can handle one of those types of shows.

The biggest problem is... Einstein is dead.

Since I had no strategy for landing the Einstein interview, I decided to just place a call to his people. Tough task. At Einstein.biz, they do have a contact form, but it has just two fields and one of those irritating CAPTCHA forms. There's no process whatsoever for requesting interviews. Physicists are evasive suckers.

When I finally did get in touch with his people, they insisted Albert was completely unavailable for interviews. I tried my best to be polite and pushy at the same time, but to no avail. They told me he was dead.

I get my news mostly from Twitter these days and thought I was fairly in the know. I had read about the passing of Neil Armstrong and the confession of Lance Armstrong, but had never seen a single tweet about Einstein's death. It turns out he is indeed deceased, which explains a lot.

But one can dream.

For reasons that should now be obvious, I gave up.

My pursuit of the late great Albert Einstein was on my mind when I went to bed that night. And the craziest thing happened. We met.

In my dream, I wandered into a watering hole called "The Photo Electric Effect," and there he was—the genius, nursing a Guinness.

The stool next to him was vacant, so I sat down, ordered the house special martini, "The Manhattan Project," and we started shooting the breeze. We talked a bit about this and that—hairstyles, Mozart, the Yankees... I'll spare you the details.

But somewhere in the vicinity of our second or third round, we got into the "so what do you do?" conversation. He started in about quantum physics, but quickly sensed I had no idea what he was talking about, so we moved on to my profession.

Here's how my conversation with Albert Einstein went.

ALBERT
Online marketing? Could you show me what you mean by that?

BARRY
Sure. You see here on my phone, we're looking at the Web. Brands build a home on it called a website. They publish stuff on it. Quite a few have hired me to create the content and try to get people to discover it, experience it, and share it.

ALBERT
For what purpose?

BARRY
Marketing, basically. The more a brand can earn the awareness and affection of the consumer, the more likely they'll be able to sell them their stuff.

[Albert took a few notes, with a notebook—the paper kind.]

ALBERT
And there are a lot of these websites?

ALBERT
It's hard to stand out then, yes?

[Clearly, the man is a fast study.]

ALBERT
So how do you make them stand out?

BARRY
You have to have a strategy, then create interesting content that people value, and then try to achieve the best possible conversion. But it doesn't always go as planned. You have to experiment.

[Something about the word "experiment" seemed to really spark Albert's interest. He became noticeably more engaged.]

ALBERT
You run experiments? I have some experience with that.

BARRY
Well, yes. Mostly what I mean is we publish stuff and then measure the results. It's hard to predict what will happen. For example, I just published an e-book called "Strike a Chord: Lessons for Making Your Web Content Resonate." 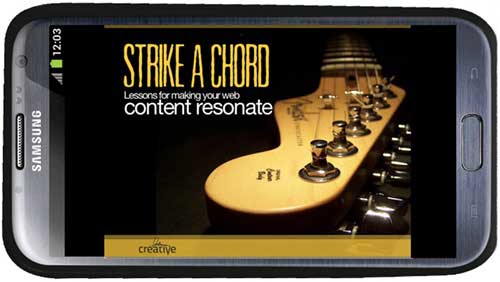 I'm frustrated with it. I put a ton of time into planning, writing, and designing the piece. I believe it's one of my best works, but it didn't perform nearly as well as I thought it would. It hasn't been viewed, shared ,or downloaded like I had hoped.

ALBERT
And this eBook you created...
Every day it's the same?

BARRY
It is what it is. I don't know what the deal is.
It's insane.

It's not insane, Barry. Let me tell you the definition of insanity.
Insanity is doing the same thing over and over again... and expecting different results.

BARRY
I think I get you Albert. You're saying...
Uh, what are you saying?

ALBERT
Change it.
Is that something you can easily do?

ALBERT
Do it. If it's not working, try something else.
You said it's not effective. You also said online marketing is experimental.
Form a hypothesis for what could be wrong and try again.

The theory of optimization.

How about that? Smart guy. What was so mysterious to me was so obvious to him. "Change it," he said.

We shot the breeze for a few more minutes, but before long, he told me he needed to get back to work. He was working on something big. He wouldn't give me all the details, but he said, "Stay tuned my friend." He jotted something down: e = mc2

You got me. I suck at math.

Postscript: Because my e-book featured a guitar, and its headline, "Strike a Chord," was large and dominant, and my subhead, which explained that the e-book was about Web content, was small, I thought a viewer could mistake it for a document about guitar playing.

I changed the title. I also redesigned the cover. In gigantic type it now reads, "Your Content Shall Rock." I uploaded the new version to SlideShare. It became a featured presentation and was viewed roughly 30,000 times in one day.

So here's the secret to effective online content: If it's not working, change it.

Barry Feldman is the author of SEO Simplified for Short Attention Spans. Barry operates Feldman Creative and provides content marketing consulting, copywriting, and creative direction services. He contributes to top marketing sites and was named one of 25 Social Media Marketing Experts You Need to Know by LinkedIn. To get a piece of his mind, visit his blog, The Point.