Whether a multibillion-dollar corporation or a local plumbing business, your brand looks woefully behind the times if you don't have a presence on social media, including Twitter.

Companies have hired armies of smart, hip, Web-savvy people to usher their brands into a new era of perpetual connectedness that allows them to reach their customers in new and interesting ways. 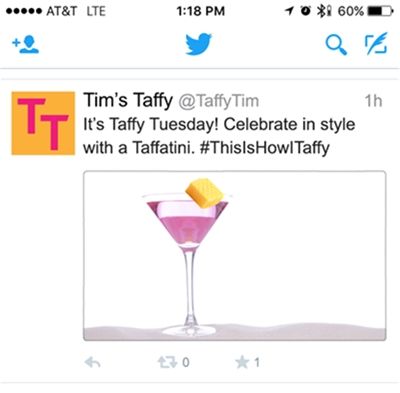 That is no way to meaningfully communicate with people: It's smarmy, pointless, and ultimately devoid of any actual messaging. Why? Because we are focused on the tool and not the content. If you're thinking only about how to market with a computer, you're going to sound like one.

Luckily, it is possible to be better. I've constructed a few simple mantras for social media managers, and keeping these in mind will allow you to talk to people in a way that might actually result in their caring about what you say.

Repeat these to yourself the next time you're ready to tweet.

Somewhere along the way, Twitter's 140-character limit and ease of use led us to believe that individual posts are less important than a persistent presence on the service. Companies have quotas: X number of tweets per day/week, this many mentions of a branded hashtag, etc.

But that approach ignores the most important thing about Twitter: Every tweet is an advertisement for your brand, and it should be treated as such.

Look at that insipid taffy tweet again. Does that say anything about the brand, besides the fact that it makes taffy and its people are apparently into day-drinking on Tuesdays? You'd never approve that for a print ad, so why is it OK to shove out onto Twitter, where it may be in front of even more people?

Tweets are not disposable; quality should not be wasted in the name of quantity.

It seems like every few months yet another brand gets caught with its pants down by trying to tie into an event or holiday with what many would call "the tact and self-awareness of a potato."

I understand the impulse: Brands want to get people's attention on days that draw a lot of eyes and dollars. The problem is that you and every other company on the face of the Twittersphere are trying to do the same thing, and your customers can only look at so many "we colored our product green for St. Patrick's Day" tweets before they tune out entirely.

If you're a popular fertilizer brand, Arbor Day is a great day for a cute post. However, you probably don't have a whole lot to contribute on Cinco de Mayo. Wait for the right reasons. Pick your moments.

One useful, helpful tweet a month is preferable to five a week consisting of content that's shoehorning its way into people's lives and becoming an annoyance.

3. There are times to have a conversation, and times to advertise

Social media managers must ultimately face this uncomfortable truth: Many of your customers do not have a meaningful, personal connection with your product. It's not an indispensable part of their self-identity. And they probably don't want to talk about it all the time.

Accordingly, the most ineffective and wasteful form of Twitter marketing comes from asking your followers a question and waiting for the replies to roll in. Imagine a billboard for a burger joint that says in six-foot-tall letters: WHAT'S YOUR BEST BURGER STORY? CALL 1-800-555-5555 AND TELL US. That billboard would be considered a waste of space. It's one-sided and won't generate a significant number of responses.

The idea of the social media conversation is great, but it's important to remember what a conversation actually is. It's not a series of questions and answers. In the end, you don't need your consumers talking to you about what they think of your product. You want them to be talking to each other about your product.

4. Stick to what makes you special

Advertising 101: a strong brand voice is what separates you from the competition and makes you desirable.

Look at that taffy tweet one more time. It's from Tim's Taffy, but it could easily be Tom's Taffy, Tina's Taffy, or Jay's Taffy (Jay has the additional handicap of not lucking into an alliterative taffy-maker name). Think about what makes you different, and stick to it (no pun intended).

The best Twitter accounts are the ones that think and act quickly. Twitter is a reactive medium. Debating for too long about what you want to post means you'll get left behind. Sadly, however, the result is a lot of poorly conceived ideas that place presence over effectiveness.

Being able to escape this catch-22 relies on being aware of what your brand is trying to accomplish and communicating in a voice that is short, simple, and transparent.

5. Stop trying to be cool

This is possibly the saddest truth we all have to face one day: We don't have our finger on the pulse of what this young, social media-obsessed audience is into. But that's OK! We're marketers. We're not teenagers who spend hours online talking to our cool friends and expressing ourselves in memes and pop culture references.

Trying to be cool rarely works. Tim's Taffy up there will get nothing more than an eye-roll for trying to jam a quote from the movie Anchorman into its otherwise meaningless tweet. Let's put it in sports terms for us older folk: It's better to wait for a pitch you can hit rather than swing and miss.

That's not to say we can't be current: OREO did a fantastic job with its much-hailed social posts that touched on events as they were happening, and it did it by commenting on something it was actually witnessing—not after digging through the dumpster of loose ideas out behind the BuzzFeed offices.

Engaging with the same content your audience does keeps you relevant without feeling like the online equivalent of your dad in a backwards baseball cap.

So here's my one rule for great brand tweets: Speak in a strong, clear brand voice that respects your customers' intelligence, time, and desires. They'll respect you for it. More importantly, they may reward you for it. 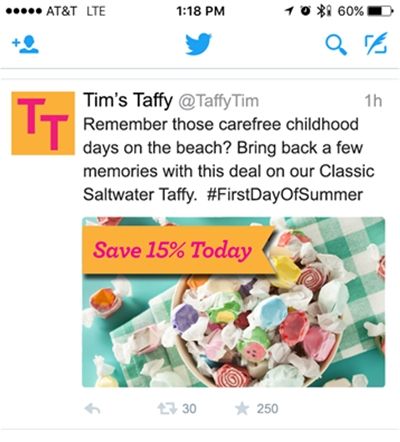 Ed Morgan is a senior copywriter at Scout, a full-service advertising agency specializing in consumer/B2B and healthcare.