One Day, One Job—an online company that specializes in helping college students find entry-level jobs—aspired to grow its Web traffic and was attracted to Facebook by the vast numbers of active students on the network.

Although the company set up a Facebook Page, it was more interested in leveraging the precise targeting capability of Facebook's advertising platform.

The company initiated a dual campaign with some ads targeting Ivy League seniors and the rest targeting seniors from 40 other top-rated schools, both on a CPC and CPM basis. Ad copy included the phrases "Ivy League" and "elite colleges and universities," respectively.

For the CPM campaigns, 8,000 impressions were allocated to the Ivy League ad, and 14,000 impressions to the version targeting other schools. Click-through rates averaged 0.06% in both cases.

Both CPC campaigns, however, had over one million impressions each, with the Ivy League ads achieving a 0.15% click-through rate and other school ads registering 0.10%.

Subsequently, the company found that Facebook referrals tend to be more engaged Web site users: They visit more pages and stay on the One Day, One Job website twice as long as the average user.

In a separate experiment, One Day, One Job worked with its job-seeking clients to conduct Facebook ad campaigns targeting potential employers. Facebook is one of the few places where people can be targeted based on place of employment. The company used this capability to help five jobseekers advertise their skills to people associated with choice organizations.

Jobseekers created the ad copy themselves and included a personal photo, then linked the ad to an online resume, such as a profile listed on LinkedIn or VisualCV.

One candidate's ad targeted the Walt Disney Company and received 685 clicks. It resulted in 21 emails, 4 Facebook messages, and a job interview at the company. Several respondents offered advice for finding a job with Disney or offered to forward the candidate's resume to their supervisors. 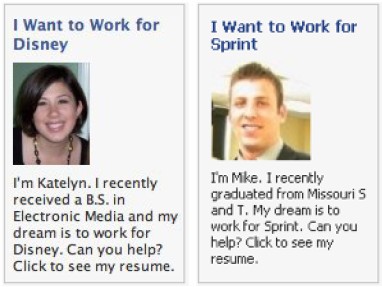 The ad was viewed 50,992 times and clicked 117 times, but it resulted in no leads. In a second attempt, the candidate specifically targeted Sprint with copy that read in part: "My dream is to work for Sprint. Can you help?" Due to a smaller target pool, the ad was viewed only 2,588 times but received 32 clicks and resulted in five email contacts from current and former Sprint employees.

Overall, the click-through rates achieved by the jobseeker ads were 10-20 times higher than One Day, One Job received in its own ad campaigns.

The most successful jobseeker ads targeted a single company with very specific copy that mentioned the company name, whereas ads targeting multiple organizations by location were less effective, drawing inapplicable clicks that lowered the return on investment.

One Day, One Job's next step will be to use this insight to improve its own campaigns and target specific universities, rather than taking the more generic "Ivy League" and "elite colleges and universities" approach.

An increasing number of companies are using Facebook, Twitter, and other social-networking sites to increase Web traffic. Check out our case study, Four Steps to Spurring B2B New-Product Awareness and Sales via Twitter, to see how one company used chatter and buzz on Twitter to boost sales.

Note: This case study is based on an entry in "Facebook Success Stories: How 12 companies are leveraging the social network to advance their marketing objectives," a MarketingProfs Case Study Collection.

Jason Alba is the author of I'm on LinkedIn—Now What??? and is working on his second book, I'm on Facebook—Now What???. He blogs on networking, career management, personal branding, and job search topics at JibberJobber.

Kimberly Smith is a staff writer for MarketingProfs. Reach her via kims@marketingprofs.com.