Though year-over-year growth is expected to slow in 2009, WoM spending is on pace to increase another 10.2% this year, placing WoM among the fastest-growing advertising and marketing segments, says the report.

Changing consumer behaviors and advancing technology, and their residual effects on the advertising and marketing sectors, will continue to fuel growth in WoM marketing, according to PQ Media, which forecasts that spending from 2008 to 2013 will increase at a compound annual growth rate (CAGR) of 14.5%.

The firm defines WoM marketing as an alternative marketing strategy that uses both online and offline tactics to encourage consumers to talk about products and services. WoM marketing is supported by research and tools, and often it is facilitated by brand ambassadors.

"The most influential marketer in a consumer's life is someone they know and trust, such as a family member, friend, or colleague," says Patrick Quinn, president and CEO of PQ Media.

As consumers become more connected to one another through high-tech devices such as smartphones and social media outlets like Facebook and Twitter, brand marketers have increased spending on WoM as part of their overall marketing strategies, according to PQ Media.

Consumer product goods companies (CPGs) led in WoM spending in 2008, the study found, accounting for 17.4% of  total WoM spending (see table below). Rounding out the top 5 list of 2008 WoM spenders by category were food and drink, finance and B2B services, electronics and telecommunications, and retail. 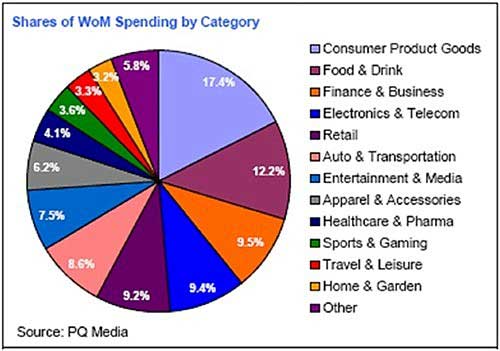 Auto and transportation would likely have made the top 5 list in 2008 except for the financial troubles that beset the industry and led to major cuts in advertising and marketing budgets, PQ Media says.

Two sectors make up the WoM industry: (1) content and service providers and (2) ancillary products and services:

Developing WoM communities both online and offline are emerging trends within the content and services sector. Spending on WoM online communities increased 26.6% in 2008, to $119 million.

Although it's the smallest category in the content and services sector, WoM media is the fastest growing, with spending up 34.6% in 2008, to $109 million.

Both WoM sectors—content and services and ancillary products—are expected to post strong gains, with spending on ancillary products anticipated to increase faster, primarily because the market is smaller and therefore has more growth potential.

About the data: As part of PQ Media's econometric methodology in developing the research cited here, the Word of Mouth Marketing Association (WOMMA) provided the firm with access to its members, many of whom participated in the survey and interview process.