Business Use of Social Media Surges

The use of Facebook, Twitter, and blogs for business purposes has skyrocketed in the last six months—with indications of wider adoption and more frequent sessions, according to research by Palo Alto Networks into application traffic patterns of computer networks.

Facebook is the dominant social networking site in the workplace: 94% of companies used Facebook over the past six months (ended September 2009), compared with 37% six months ago, finds the Application Usage and Risk Report (Fall Edition, 2009).

Sessions consumed per organization by Facebook users increased 192% during the period, while bandwidth consumption jumped 294% to 6.3GB per organization, indicating more frequent or longer periods of use, Palo Alto Networks found. 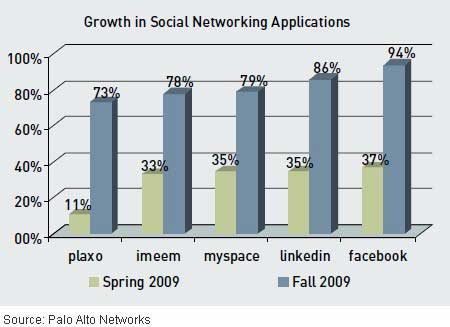 Twitter is the most popular instant messaging application in the workplace: 89% of companies used Twitter, compared with 35% six months ago.

Sessions consumed per organization by Twitter users increased 252% over the previous six months, indicating more frequent periods of use, while bandwidth consumption jumped 775% to 184 MB per organization, even though tweets are limited to just 140 characters. 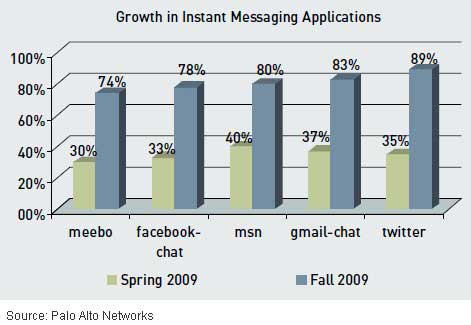 Facebook Mail and Facebook Chat applications have become the fourth most commonly used applications within their respective categories. Interestingly, though Facebook Chat was released in April 2008, in a mere 18 months it has become more widely used than Yahoo IM and AIM (within this sample). 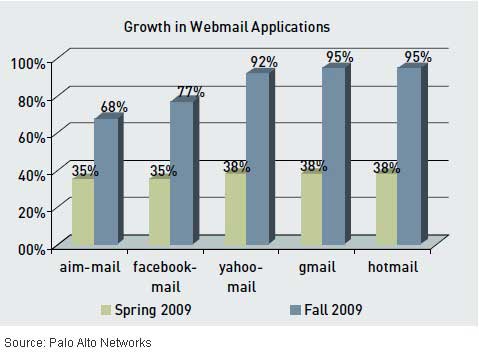 Business users are significantly more active than six months ago in their blogging and posting activity. In addition to the frequency with which these applications were found, overall activity increased from several perspectives. The number of application variants found more than doubled to 23, from 11 just six months ago. In addition, total session activity increased by a factor of 39 while total bandwidth consumption increased by a factor of 48. 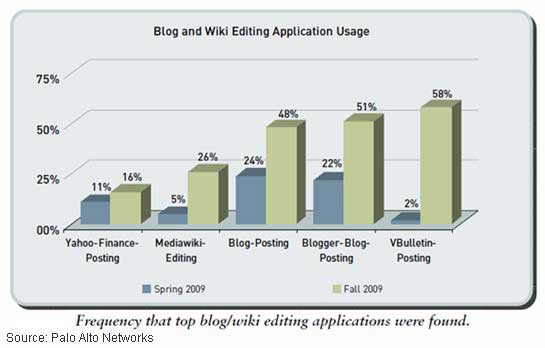 The adoption of these applications and other enterprise 2.0 applications, in general, is driven by end users rather than IT departments, while pace of adoption is a result of the ease with which they can be accessed, the study finds.

About the data: Published by Palo Alto Networks, the Application Usage and Risk Report (Fall Edition, 2009) summarizes the application traffic patterns, between March and September 2009, of more than 200 organizations' systems networks worldwide, across nine industry categories.