Over the past 20 years (1990-2009), the Super Bowl has generated $2.17 billion of network sales from a total of 210 different advertisers and more than 1,400 commercial messages, according to TNS Media Intelligence.

For the 2010 game, the rookie lineup is expected to include Electronic Arts and HomeAway, among others.

Ad Volume Higher Over Past 10 Years

Even with the rising costs of advertising, the volume of commercial time in the Super Bowl game has been edging up over the past 10 years.
The NBC telecast of the 2009 Super Bowl contained 45 minutes and 5 seconds of network ads––including paying sponsors, commercial messages from the NFL, plus house ads aired by CBS––up 13.4% from 39 minutes and 45 seconds of ads in 2000. 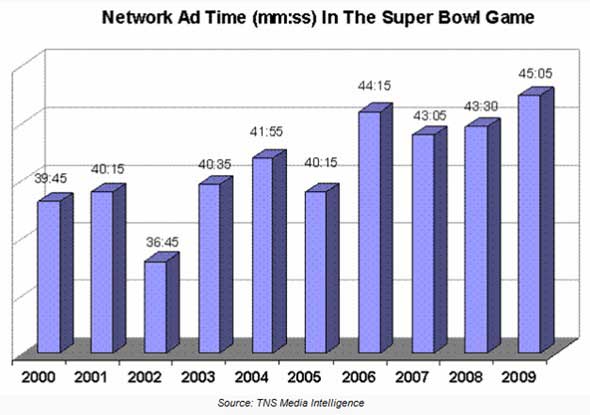 Among the prime ad categories, the top advertiser by dollar value is typically the network that televises the game––accounting for 15-20% of all commercial time. In 2009, the value of this air time exceeded $42 million.

Over the past decade, the Super Bowl has attracted a bevy of movie studio, automotive, and dot-com companies, making them the most populous and competitive ad categories.

The Super Bowl Versus Other Franchises

Although the Super Bowl is a single telecast––compared with Major League Baseball's World Series (4-7 games), the two franchises have historically run neck and neck in terms of ad spending.

About the data: The 20-year advertising data was compiled by TNS Media Intelligence from its database.