Consumers spent an average 5.6 hours on social networking sites like Facebook and Twitter in December 2009, up 82% from the same time last year, when users were spending just under 3.1 hours on social sites, according to a 10-country* study by The Nielsen Company.

Overall traffic to social networking sites reached 307.4 million unique visitors in December 2009, up 27% from 2008 levels, according to the study.

Social networks and blogs were the most popular online category when ranked by average time spent in December, followed by online games and instant messaging, Nielsen found.

With 206.9 million unique visitors, Facebook was the top social networking destination in December 2009 among the countries studied, with 67% of social media users visiting the site during the month.

US Time Spent on Facebook and Twitter Outpaces Overall Category
Americans, too, continue to spend more time on social networking and blog sites: Total minutes spent on social sites increased 210% year over year (YOY) in December 2009, and the average time per person increased 143% during the same period. 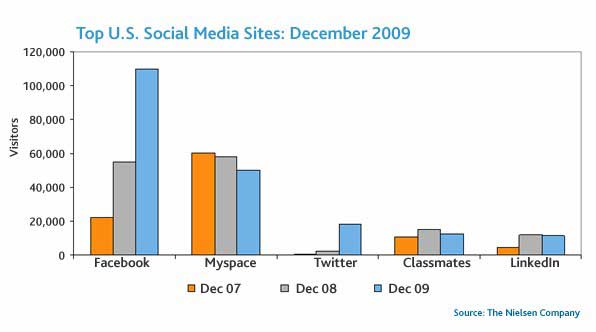 The US recorded the highest number of overall social media and blog users in December 2009, with 142.1 million unique visitors during the month, followed by Japan (46.6 million), and Brazil (31.3 million).

Australians spent an average of nearly seven hours per person on social sites in December, the highest level among surveyed countries, followed by the US (6 hours and 9 minutes), and the UK (6 hours and 8 minutes). 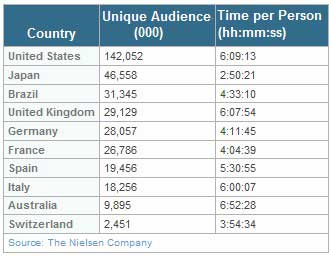