Among the 38 brands that ran TV commercials during the Super Bowl this year, 75% reported twice as many blog posts about their brands on Sunday, compared with levels on Sunday evenings over the previous six months, reports Radio Business Report, citing research from Prophesee, the social media arm of Interpublic Group's Initiative unit.

More than 30% of Super Bowl advertisers generated a threefold increase in the number of blog posts about them.

Below, additional findings from Prophesee.

Flo TV, a first-time advertiser in the NFL finals, experienced a spike of 50 times the number of blog posts it usually generates, the highest for any advertiser during this year's event.

Other advertisers that registered large increases in blog activity on Super Bowl Sunday:

In addition to increases in the volume of posts written about them, some advertisers experienced increases in sentiment levels: Overall, positive sentiment toward Super Bowl advertisers increased 4 percentage points to an average 56% on social media platforms,  compared with the 52% average of the past six months.

Vizio's ad was most positively received among celebrity-endorsed spots, with 73% of all posts expressing positive sentiment.  Kia's casting of the puppets from Yo Gabba Gabba to launch the Sorento came in a close second, with 68% positive sentiment.

Overall, blog posts about the Super Bowl increased sharply from 15,702 in 2009 to 25,725 this year. The posts were made across 57 countries––from Afghanistan to Venezuela––compared with 42 countries last year. However, 81% of all posts originated from the US.

Over 3,600 of the posts were specifically about the advertising.

An estimated 720,000 Super Bowl-related tweets were initiated this year, and Coca-Cola added over 250,000 Facebook fans over the course of the Super Bowl weekend, according to Prophesee.

The biggest winners were Teleflora, Volkswagen, and Focus on the Family, while the biggest losers were Motorola, Intel, and Taco Bell, according to the Networked Insights data: 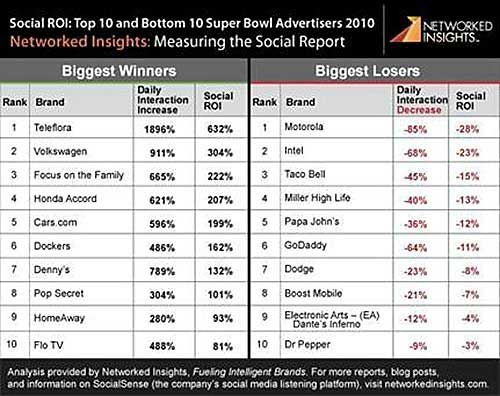 "Social ROI" refers to the engagement increase (or decrease) per the estimated amount spent on Super Bowl ads, essentially showing the change in engagement per million dollars spent.

Although many Super Bowl viewers watch just for football, others tune in just for commercials. To better understand viewer behavior, Twitter conducted an analysis of Sunday's tweet behavior.
Incoming tweets were categorized as game-related, brand-related, or neither. The following graph represents the minute-by-minute tweet activity during the game: 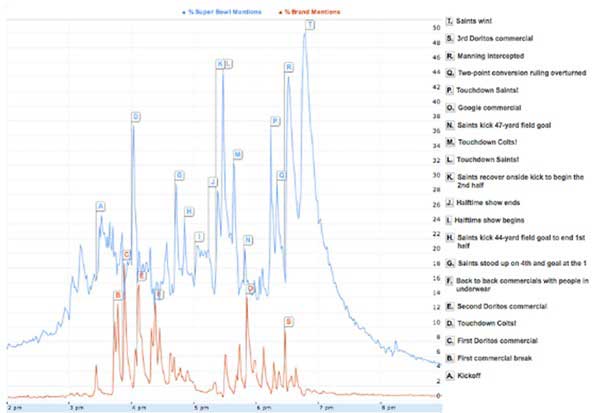 See a more detailed version of the graph.

Budweiser and ETrade each sponsored two of the top 10 most popular ads aired on CBS during Super Bowl XLIV, according to a survey from MediaCurves.

Budweiser's Bull ad was the most popular ad of the evening, receiving a score of 72.78, a metric created by MediaCurves, and its Bridge Out ad ranked No. 6 (65.45).

About the data: The rating of the top 10 Super Bowl ads was conducted by MediaCurves via online survey sent to thousands of participants on Super Bowl Sunday.

The survey of social media activity generated by the Super Bowl was conducted by Intiative's specialist social media strategy and activation unit Prophesee.

Networked Insights used its listening platform, SocialSense, to generate the social-engagement data. The SaaS platform was used to track ideas and conversations throughout social networks about the ads. In the case of Pepsi, Networked Insights substituted the estimated spend on the company's social media campaign.