Nearly one-third (30.8%) of smartphone consumers accessed social networking sites via mobile browser as of January 2010, up 8.3 percentage points from 22.5% a year earlier, according to comScore.

Over one in ten (11.1%) of mobile phone consumers accessed a social networking site via mobile browser as of January 2010, up 4.6 points from a year earlier. 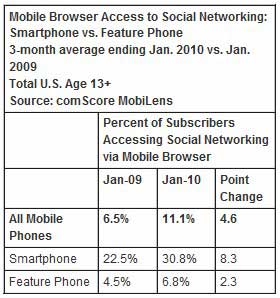 Much of the growth was driven by smartphone consumers, who were over four times as likely as feature-phone owners to access social networking sites via mobile browser (30.8% vs. 6.8%) as of January 2010.

On average, 25.1 million mobile users accessed Facebook monthly via mobile browser as of January, up 112% from a year earlier. 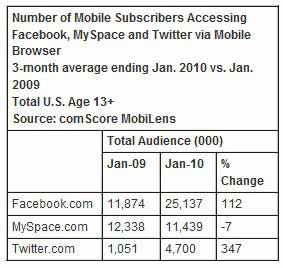 MySpace attracted an average of 11.4 million mobile-browser users monthly as of January, approximately one-half that of Facebook's level. Tellingly, Facebook's mobile browser audience surpassed that of MySpace in February 2009—three months earlier than Facebook's PC-based audience exceeded that of MySpace.

Twitter, which has undergone tremendous growth in both mobile and PC-based visits, attracted an average of 4.7 million mobile monthly users as of January 2010, up 347% from a year earlier.

These figures do not include access of the social networking services by the nearly 6 million mobile phone owners who do so exclusively through mobile applications.

In a demographic view of social networking activity on mobile devices, the Nielsen company found that women use their phones to "tweet" and "friend" 10% more than men do, according to a separate study: 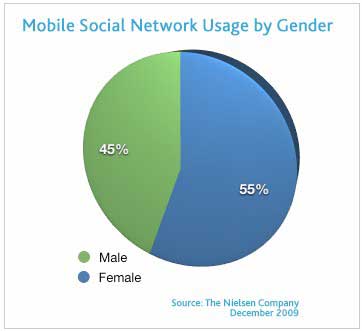 Although social networking is commonly thought of as an activity for younger people, adults age 35-54 are more likely than other age groups to be active mobile social networking consumers, according to Nielsen: 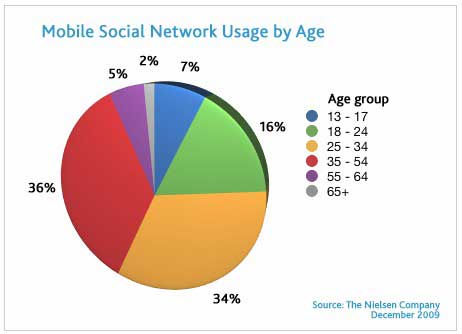