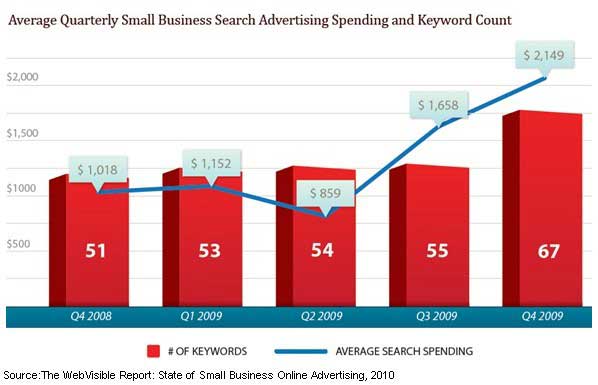 Advertisers also increased investments on keyword inventory: The average keyword count per advertiser, which represents root keywords (vs. individual bid units with geographic modifiers), increased to 67 keywords in the fourth quarter, up 21% from the previous quarter.

Video capability was the fastest-growing website feature for small business advertisers: 19% of advertisers used video in the fourth quarter of 2009, compared with just 5% of advertisers who did so a year earlier.

In mid-2009, some WebVisible advertisers began to move a portion of their search engine spending to Ask to take advantage of relatively lower cost-per-clicks; that move drove Ask's share of spend to 6.9% in the fourth quarter of 2009, up 4.5 points from the 2.4% recorded in the third quarter.

Click-through rates (CTR) have been steadily improving on all the engines for WebVisible small business advertisers:  Google's CTR improved 32% YOY in the fourth quarter of 2009, while Yahoo was up 123% and Bing was up 109%. 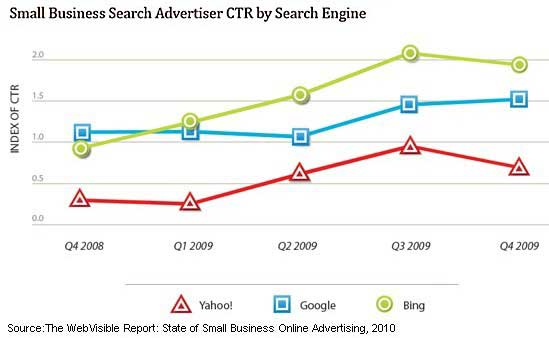 On a quarterly basis, CTR did not change significantly: Google registered a slight improvement in the fourth quarter of 2009, up 2.5% from the previous quarter, while Yahoo declined 23% and Bing dropped 3.3%.

Overall, increases in CPCs—relative to increases in spending—were small across all the engines on a quarterly and annual basis. 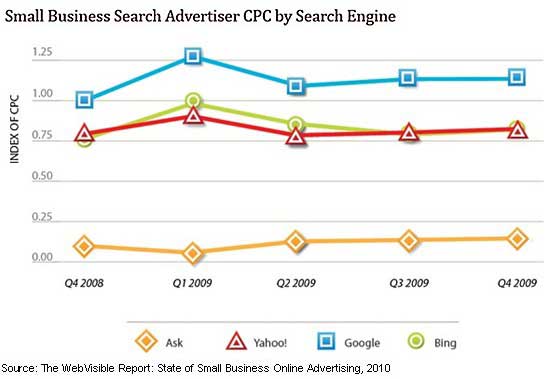 Google continued to lead in CPC pricing in the fourth quarter 2009, up 12% YOY. CPCs on Bing and Yahoo were up just slightly QOQ—2.2% and 2.5%, respectively.

Ask, at one-seventh the cost of Google, registered the lowest overall CPCs in the fourth quarter 2009.

Those actions are predominantly calls, but also include sending emails or SMS texts, form fills, printed driving directions, or video views, according to WebVisible.

About the data: Findings are based on data collected from over 12,000 of WebVisible's US advertisers from 4Q 2008 to 4Q 2009 who accounted for nearly $22 million in US small business ad spending in the fourth quarter of 2009.