In addition, the percentage of Americans who say the state of corporate reputation is "not good" or "terrible" decreased to 81%, from 88% in 2008. 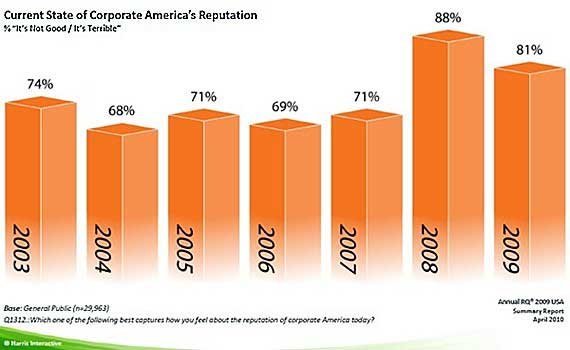 Below, other findings from the 11th Annual Harris Interactive US Reputation Quotient (RQ) Survey, which measures the reputation of corporate America and ranks the 60 "Most Visible Companies in the US."

Berkshire Hathaway No. 1 on Corporate Reputation

Among the six companies that received an RQ score over 80—considered an "excellent" reputation—Berkshire Hathaway took the top spot from frequent top-scorer Johnson & Johnson by less than 0.5 points. Rounding out the top 6 were Google, 3M Company, SC Johnson, and Intel Corporation.

SC Johnson (No.5) appeared on the list of the 60 most visible companies for the first time this year, and it is the first company since Google in 2005 to make its top 60 debut as a top 5 company.

Nine Lowest-Ranking Were Recipients of Bailouts

At the other end of the spectrum, AIG moved up one spot to No. 59, ceding the lowest rating to Freddie Mac (now No. 60), another first-time company on the list of the 60 most visible. Those two companies, along with Fannie Mae (No. 58), received RQ scores below 50, which over the past eight years of this study has been a strong indicator of a lack of future viability for a company.

Among the 10 lowest-scoring companies, nine have recently received government bailout money or remain government supported, including newcomer Goldman Sachs (No. 56 with an RQ score of 51.36).

"In addition to the slightly more positive reputation environment, we see a very different overall view of how companies are being evaluated and perceived this year," said Robert Fronk, SVP, Global Practice Lead and Reputation Management at Harris Interactive.

"In last year's study we saw companies that provided value and a sense of comfort getting strong overall reputation ratings. This year, we see overall corporate governance, performance, and leadership driving positive reputation perceptions. Finding two holding companies, Berkshire Hathaway and SC Johnson, in the top five, is a visible reflection of this difference in focus."

Ford, ranked No. 37, had an RQ score of 69.77 this year, up 11.28 points from 2008, the largest single-year improvement in the past nine years, placing it in the category of companies with a "good" reputation—quite an accomplishment, considering its starting point and the state of the automotive industry.

"Ford's almost record-breaking leap in reputation, the second-largest in our study's 11-year history, was enabled by perceptions of their products and services finally catching up with the other positive indicators we have seen in the market over the past few years," said Fronk.

"This, combined with perceptions of a clear vision and strong leadership, really distinguishes Ford from one of the lowest-ranking industries and provides them with a competitive business advantage."

At an industry level, technology remains the highest-rated industry, registering a five-point increase from last year to a current 72% positive rating. The two largest improvements in reputation were in retail and automotive: Both registered nine-point increases. 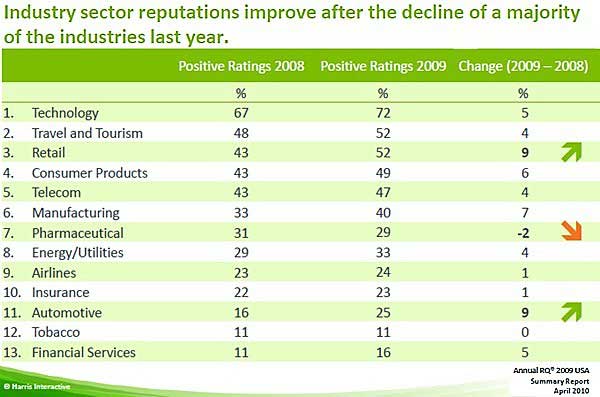 Companies were also ranked across six additional reputation-related categories. The top 5 corporations within each of those categories are the following:

Overall, the stronger a company's reputation, the more likely consumers invest or recommend investment in the company, according to Harris.
Other company-specific findings:

About the data: The Annual RQ surveys more than 29,000 US consumers, using its proprietary Harris Poll online panel. Respondents are first asked to identify the 60 most visible companies and then are surveyed to rate those companies, based on their reputation, on 20 attributes that comprise the RQ instrument. The 2009 RQ survey was conducted from Dec. 29, 2009 to Feb. 15, 2010.