Although one-half (52%) of small business owners say their business's economic situation is worse than it was 12 months earlier, almost three-quarters (73%) are optimistic about the future of their businesses, according to a February survey from Pitney Bowes.

As entrepreneurs attempt to overcome the financial challenges of a tough economy, they remain positive and resilient: If forced to close their businesses, 34% of surveyed small business owners say they would start a new career, while 28% would start a new business; 32% would retire.

Below, other findings from the Pitney Bowes small business survey, which interviewed 504 small business owners in the US about the financial state of their businesses and outlook for 2010.

Despite the severity of the recession, many small business owners feel they have financial levers to pull before they would be forced to close. If their financial situations does not improve, 34% say they would change their mix of products or services, while 34% would resort to layoffs. 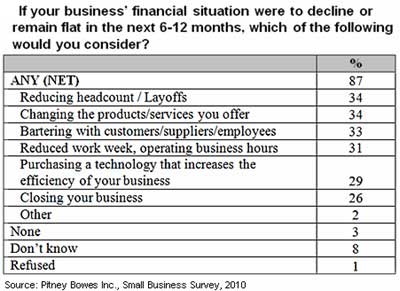 To minimize the use of cash, one-third (33%) would barter with customers, suppliers, and employees while 31% would reduce operating hours. Some 29% would invest in technologies to increase the efficiency of their businesses. 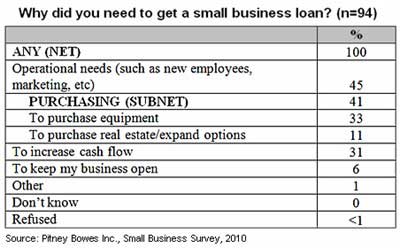 Over four-in-ten small business owners (42%) say they would most likely spend available cash on technology to boost productivity in 2010. Nearly one-third (30%) would increase payroll spending and 26% would use the money to make capital investments.

Some 18% would not spend any free cash, while 10% would use it to move to a smaller office space.

About the data: Commissioned by Pitney Bowes, the survey was conducted via telephone by International Communications Research, which polled 504 small businesses (fewer than 100 employees) across the US from February 10 to 24, 2010.