What happens on Twitter doesn't just stay there: Active Twitter users—those who use Twitter on a daily basis—are three times more likely than other online consumers to produce a wide range of influential online content (blog posts, articles, and product reviews) that affect a brand's reputation, according to a survey from ExactTarget and CoTweet.

Active Twitter users are more engaged than other online across a wide range of online activities, including the following:

Below, other findings from the report, Twitter X-Factors, which identifies the top motivations for following brands on Twitter and looks into consumers' expectations for interacting with brands online.

Twitter's reach is approximately double its active user base: 23% of surveyed online consumers read Tweets at least monthly, but only one-half of such consumers (12%) do so via a registered Twitter account, while 11% read other people's Tweets even though they haven't created a Twitter account of their own.

One out of five Twitter users (20%) say they have followed a brand in order to interact with the company. That interaction level is higher than among consumers who subscribe to brand emails (14%) or those who fan a brand on Facebook (13%).

Moreover, nine out of the 10 most common motivations for following a brand on Twitter involve consumers' desires to find information about that company. The top 2 of such motivations to follow a brand is to get updates on future products (38%) and stay informed about the company (32%). 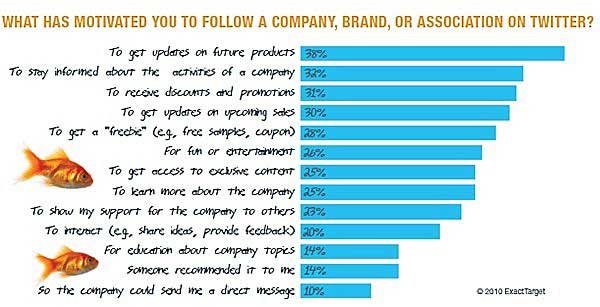