Even though a Twitter user may have a large following, his or her influence on Twitter is more strongly associated with engagement rather than numbers of followers or retweets, according to new research from the Hewlett-Packard Social Computing Lab.

That metric calculates user influence based on how far a tweet travels on Twitter, taking into account the levels of passivity that those tweets encounter along the way.

IP-Influence doesn't neatly correlate with popularity. For example, among the users with the most IP-Influence is Indonesian filmmaker Joko Anwar—who ranks nearly evenly with Google in IP-influence but has a much smaller number of Twitter followers.

Below, Twitter's 10 most influential accounts, ranked by IP-Influence, with Twitter follower data as of August 9, 2010:

The following tables list other key online influencers' IP-Influence and popularity rankings, in contrast to those of some of the most popular Twitter accounts: 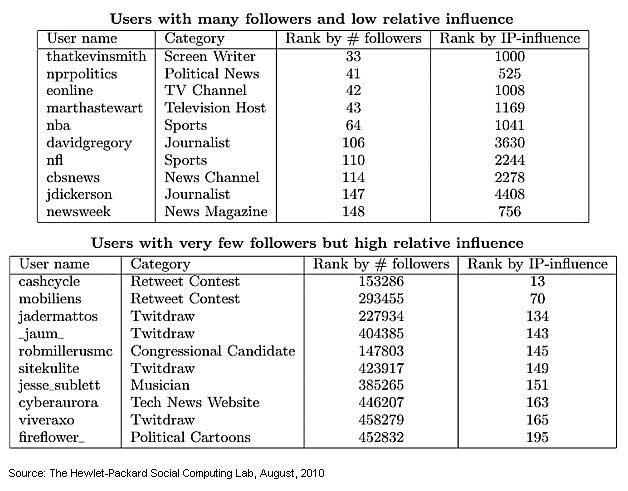 IP-Influence is a good predictor of the total number of clicks users can generate on the URLs they post, the study finds. In addition, the metric can be used for content filtering and ranking—to predict what content is most likely to receive attention based on which users mention it early on.

Though the research was based on Twitter, the IP-Influence measure is applicable to other social networks, the authors note.

About the data: Findings are based on the analysis of 22 million tweets and retweets collected during a 300-hour period beginning September 10, 2009.

Continue reading "On Twitter, Popularity Does Not Mean Influence" ... Read the full article