Pick-Up in Communications Spending Forecast for 2010-2014

Driven by gradual economic recovery, advances in digital technology, and secular shifts in business and consumer spending, total communications industry spending is on pace to increase 3.5% in 2010 and post a compound annual growth rate (CAGR) of 5.8% from 2010 to 2014, reaching $1.4 trillion in spending by 2014, according to Veronis Suhler Stevenson (VSS). 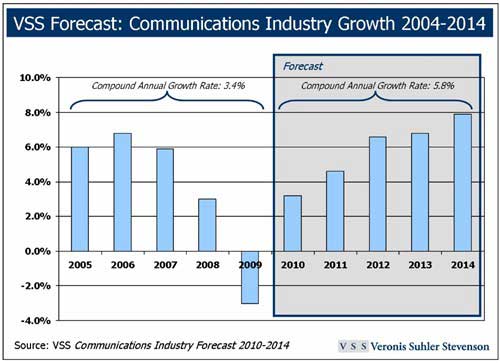 Below, additional projections issued by the private equity firm VSS.

From a revenue stream perspective, overall communications industry growth in the next five years will likely be fueled by gains in Consumer and Institutional End-User spending. The Advertising Revenue Stream, which has registered declines for two consecutive years, will experience stronger growth rates than Marketing Services during the forecast period: