Over one-half (56%) of social-media content publishers, including Twitter users and bloggers, say they have monetized their social-media activities via advertising, sponsorships, or affiliate programs, and another one-third (32.1%) say they'd like to do so, according to a survey from IZEA. 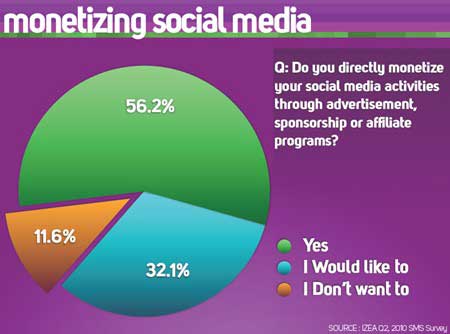 In addition, 52.3% of surveyed social-content publishers say they have received direct material compensation for their social content, and 34.2% say they'd like to receive compensation.

Below, other findings from the report on The State of Social Media Sponsorship, which explores the impact of sponsorships on engagement, compensation practices, publisher preferences, and earnings.

Brands recognize the value of building relationships with social-media influencers: 71.3% of social-media publishers say they have been approached by someone offering cash, free products, discounts, or other compensation in exchange for a blog post, tweet or other social-media promotion.

Most sponsorships (57.6%) are direct compensation for a specific post or series of posts, but nearly one-half (49.3%) of social-content publishers have also been offered free product without the requirement of writing about it.

Blog posts (64.3%) and Twitter updates (44.5%) are the most common venues for sponsored social- media activity: 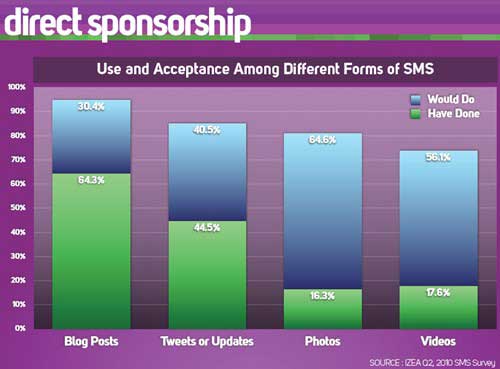 But with more Twitter users (40.5%) and bloggers (30.4%) open to various types of sponsorships, there is ample opportunity for brands to build relationships with social-content creators.

For brands hoping to do so, cash is best: 71.0% of social-media publishers say they prefer cash payment, but many will accept free product (69.3%) or discounts and coupons (49.2%). 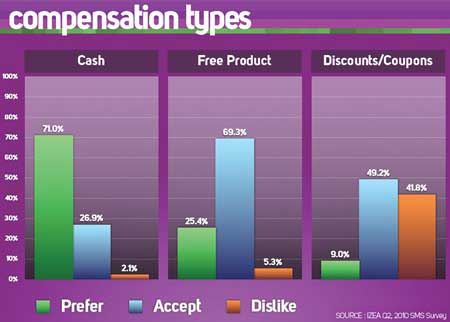 How much is a tweet worth?  Among social-media publishers surveyed, tweets are valued at $124 on average, while sponsored blog posts are worth roughly $179 each.

About the data: IZEA's report was compiled from survey data of over 2,800 social-media publishers, consultants, marketers and public-relations professionals collected in the second quarter of 2010.