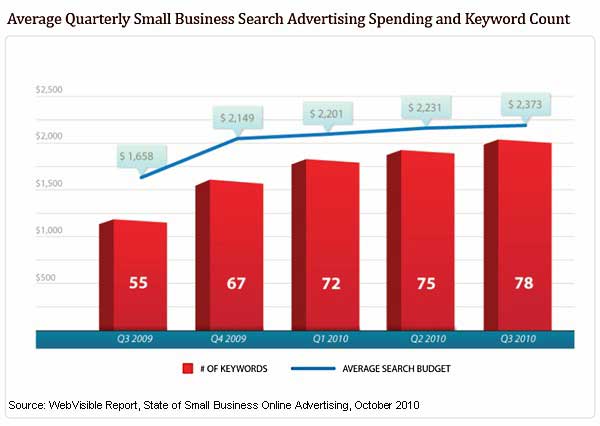 The slowdown likely signals that small business search advertisers are closing in on the optimum level of spending they need, WebVisible notes. Additionally service providers are refining their ability to determine efficient spend amounts in order for advertisers to achieve the highest return on spend.

Advertisers increased investments on keyword inventory: The average keyword count per advertiser, which represents root keywords (vs. individual bid units with geographic modifiers), increased to 78 keywords in the third quarter, up 41% from Q309, and up 4% from previous quarter.

Below, other findings from the State of Small Business Online Advertising for the third quarter of 2010.

Spending shifted toward Bing (up 37% quarter on quarter (QoQ)), Yahoo, and Ask in the second quarter, and away from Google:

Yahoo's CTR (click-through rate) improved 28% in the third quarter over 2Q10 levels, while CTRs for Bing and Google were down 27% and 5%, respectively. 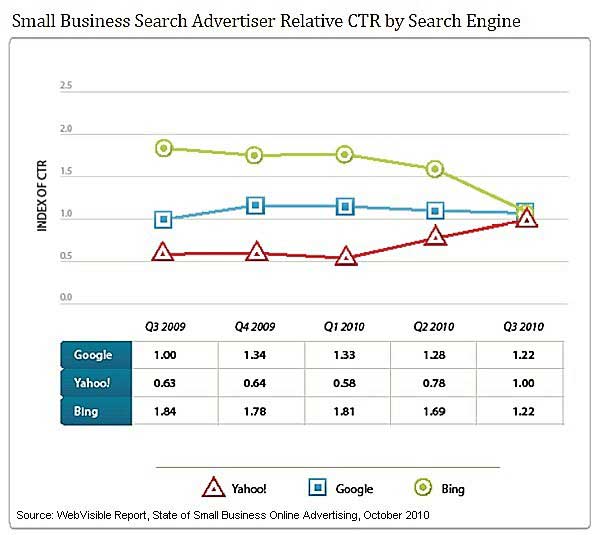 Such a convergence of CTR is starkly contrasted with CTR a year ago, when Bing's CTR was 84% greater than Google's and CTR on Yahoo was 63% of Google's.

The convergence of CPCs over the past year is similar to the convergence of CTR shown above. Together the findings suggest that the October 2010 Yahoo and Bing merger will result in a more homogenous search marketplace, with essentially two engines offering similar pricing and CTR, reaching collectively more than 90% of the search audience at any given time, WebVisible notes.

Strong YoY spending increases by dentists (up 16.5%) and physicians (up 35%) in the third quarter likely signals a return of confidence among consumers for required and discretionary medical care spending.

About the data: Findings are based on data collected from over 12,000 of WebVisible's US advertisers from 3Q09 to 3Q10 who accounted for nearly $23 million in US small business ad spending in the third quarter of 2010.