Gen-X information workers—and not those in the younger Gen-Y generation—constitute the majority of people who use social networking for business, followed closely by Boomers age 55 and older, according to a survey from Citrix Online. Moreover, the use of social and collaboration technologies among Gen-Y workers lags behind older groups.

Among all surveyed information workers—those who use a computer for work—Gen-Y workers use social networking the least frequently: 40% of surveyed Gen-Y workers (age 18-34) who use social media for business do so daily, compared with 50% of workers age 55+.

Moreover, older Boomers (age 55+) have increased their business use of social media 79% over the past year.

Workers of all ages are using social media tools more than they did a year earlier, and cite the following objectives for doing so:

Below, other findings from the five-country report conducted by Forrester Research, for Citrix Online, a division of Citrix Systems.

Collaboration Tools on the Job 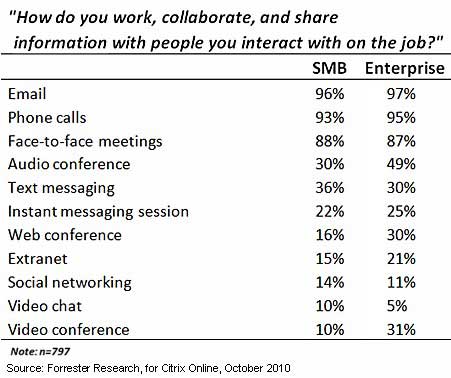 The use of collaborative technologies is growing as well. For example, 56% of workers who video chat tools in business now use them more than they did last year. Team document-sharing sites (55%) and Web conferencing (52%) have also registered increases in adoption in 2010.

Americans have more meetings—and pay more attention to them: 90% of US workers meet in person to communicate and build relationships (more than any other surveyed country). Of those, 51% meet daily, compared with 31% of French workers.

Fully three in four American workers (75%) say it's very important to pay attention in meetings to decide on a course of action, compared with 50% of the French workers.

Gen-Y workers are the least likely to say meetings are efficient. Only 29% of Gen Y workers say meetings used to decide on courses of action are very efficient, compared with 45% of older Boomers who say so.

Gen-Y workers are the least likely to pay attention in meetings: Just 51% say it's very important to do so in meetings to decide a course of action.

Multitasking during meetings is considered rude: 83% of workers say side conversations are unacceptable during meetings, and 77% frown on those doing other work on a computer or smartphone during a meeting.

Most workers still like to look each other in the eye: 75% of Germans say they like to see others during meetings, whereas 55% of American workers say the same, though they have the most in-person meetings.

About the data: Forrester Research conducted the September 2010 online survey of 797 information workers, evenly split between the US, UK, France, Germany, and Australia. Information worker is defined as anyone who uses a computer for work. Respondents were of all ages (Gen-Y: 18-30; Gen-X: 31-44; younger Boomers: 45-54; older Boomers: 55+) and from various industries.