The use of Twitter among the nation's largest corporations has nearly doubled: 60% of companies listed on the 2010 Fortune 500 have a corporate Twitter account with at least one tweet issued in the previous 30 days, up from 35% who did so a year earlier, according to research from the University of Massachusetts at Dartmouth. Meanwhile, 56% of Fortune 500 companies have a Facebook profile.

Ranked No. 9 on the F500, JP Morgan Chase does not have a Twitter account. In the healthcare industry, four companies (Humana Health Care, Boston Scientific, United Health Care, and Cardinal Health Care) have Twitter accounts with no activity. That is also true for the food chain Winn Dixie and the diversified financial services organization Freddie Mac.

Below, other findings from the 2010 Fortune 500 and Social Media: A Longitudinal Study of Blogging and Twitter Usage by America's Largest Companies, by the Center for Marketing Research at the University of Massachusetts at Dartmouth.

Impact of F500 Rank on Tweeting

Those companies positioned higher on the F500 are more likely to adopt Twitter than those positioned lower: 50% of active Twitter accounts belong to the companies in the top 200 of the 2010 F500, while 33% are ranked at the bottom 200. 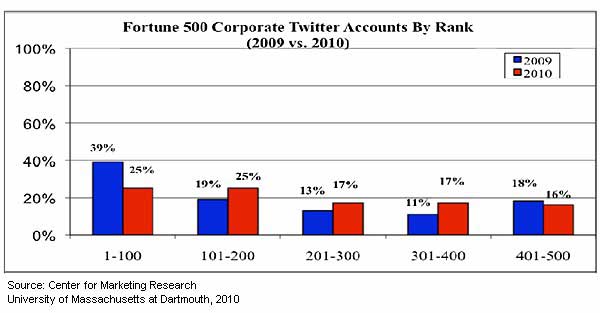 Among the F500 that use Twitter, 35% of companies (103) consistently respond with @replies or retweets within 72 hours, and many do so more often. Those Twitter accounts are kept up-to-date with current news and information, the study found, and have consistent interaction with other users, as well as on-going discussions that are easy to follow.

Among the five top ranked F500 corporations, four have blogs (Wal-Mart Stores, Exxon Mobile, Chevron, and General Electric), and one does not (Bank of America).

Exxon Mobile launched a blog in June 2010, shortly after the British Petroleum oil spill in the US Gulf region. Conoco Philips, ranked No. 6 on the 2010 F500, does not have a blog at this time.

Among the 116 blogs studied, 90% take comments, have RSS frees, and take subscriptions.

As in 2008 and 2009, companies in computer software, peripherals, and office equipment industry have the most blogs (11), followed by those in food, drug and consumer products (9), and specialty retail (8). 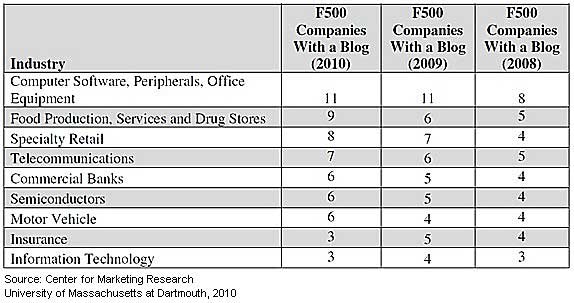 Similar to the adoption of Twitter, F500 rank influences the adoption of blogging. The top 200 companies account for 53% of corporate blogs among the F500, while the bottom 200 ranked companies (those listed 301-500) make up 29% of the total number of blogs. Those findings are consistent with studies conducted in 2009 and 2008 as well.

Some 280 companies of the 2010 F500 now have a profile on Facebook.* Insurance companies (28) are most likely to have a Facebook presence, followed by specialty retailers (26), and food, drug and consumer products companies (21).

*This is the first year Facebook was included in this study.

About the data:  Findings are from The Fortune 500 and Social Media: A Longitudinal Study of Blogging and Twitter Usage by America's Largest Companies, by Nora Ganim Barnes, Ph.D., Center for Marketing Research at the University of Massachusetts at Dartmouth. Data was collected in August and September 2010.